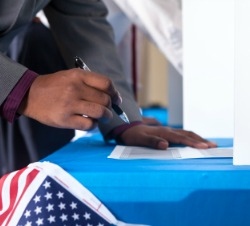 With the elections exactly one week away, many small business owners and employees are carefully considering the two presidential candidates’ plans to stimulate the economy and support the nation’s workforce before they cast their vote. According to U.S. News & World Report, 54 percent of America’s employees in the private sector work for small businesses, a statistic that illustrates the importance of supporting smaller companies in order to boost the nation’s economy overall. Issues such as corporate tax rates and loopholes, health care, and business regulations have come to the forefront of both American citizens’ concerns and the candidates’ campaigns during these last few days prior to November 6th.

Corporate tax rates and loopholes are two of the primary issues of concern for small businesses during this year’s presidential election. Obama has stated his support of tax cuts for the middle class, but maintains that he will allow Bush’s tax cuts for the wealthy to expire, effectively raising taxes on households earning more than $250,000 annually, reported The Washington Post. In contrast, Romney proclaims that he will extend Bush’s tax cuts, reduce individual tax rates by 20 percent, and cut corporate tax rates by 10 percent while also closing corporate tax loopholes (though he remains vague about which loopholes he would actually eliminate).

Business and bank-lending regulations have also been a topic of intense discussion between the candidates and amongst voters. The system of bank lending in America poses a significant barrier to small businesses, noted The Huffington Post. In today’s economic climate, the banking industry is dominated by big banks that have reduced their small business lending over the years. Smaller banks, which have been the primary providers of loans to small businesses, have seen a substantial decline as a result of the recession, with more than 900 of them closing since 2007. According to The Huffington Post, voters should consider political candidates who support the SAFE Banking Act (which sets a limit on the size of banks nationwide), as well as the transfer of public funds to smaller, local banks.

Health care options and affordability are also weighty issues amongst voters who own or work for small businesses. The Washington Post cited the National Federation of Independent Business’s finding that small business owners consider the cost of health care a primary concern. Obama has explained that his Affordable Care Act provides a tax break to small company owners that grant their workers health insurance options; however, only a minority of eligible companies have used this benefit. Romney’s stance on health care has been to repeal Obamacare and replace it with a temporary waiver system. He has also stated that he would like to allow small businesses to combine their resources in order to afford insurance plans for their employees.

Several business experts urge voters to look past candidates’ surface-level statements to understand the actual implications of certain tax, health care, and regulation policies prior to their November 6th decision. For example, according to U.S. News, both Romney and Obama have discussed their intentions to lower corporate taxes in an effort to support the economy. However, as over 75 percent of small business owners incorporate their company’s revenue into their personal income in order to avoid double taxing, business experts such as John Kane of the Job Creators Alliance have expressed concern that politicians who intend to raise taxes on the “wealthy” may inadvertently target the very small business owners whom they proclaim to support. “[W]hen politicians talk about raising taxes ‘only on the wealthy’ to help bring more revenue to the federal government, their proposal may sound good in theory, but consider this: higher taxes means more money taken away from these small businesses that would otherwise be invested back into the business, maintain the jobs they currently provide, or hire more workers,” Kane wrote in U.S. News.