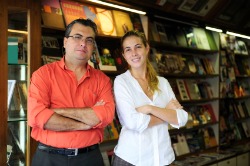 With Main Street leading the employment surge, the private sector rapidly expanded more than forecast in November and boasted its largest gains in the last three years, according to a private report released today.

Payrolls from large businesses, those with 500 or more employees, rose by 2,000 while medium-sized businesses, which employ between 50 and 499 workers, increased by 37,000. Accounting for nearly 58 percent of the employment spike, businesses with fewer than 50 employees added 54,000 jobs.

"There is just a feeling we have turned a corner," Chairman of Macroeconomic Advisers Joel Prakken told reporters on a conference. "It seems to me that we have left behind the recessionary declines of employment. We have passed through a phase where employement was flat."

It is the service sector in particular, not goods producers, that is responsible for the substantial job increase. The service sector alone generated 49,000 of the 54,000 new hires, according to the figures provided by ADP.

Despite the encouraging data from the job market, Prakken said it would take even greater monthly employment gains to significantly reduce the nation's troubling unemployment rate, which is forecast to remain at 9.6 percent.

The public sector and non-profit corporations ranked the highest in the nation in lay offs, declaring 10,761 job cuts during November.

According to Bloomberg, a higher job growth rate would produce more incomes and facilitate consumer spending, which accounts for nearly 70 percent of the nation's gross domestic product, one of the primary indicators of an economy's welfare.

It is estimated that overall jobs gains have risen by 145,000 in November, according to the median forecast of economists surveyed before the Labor Department's December 3 study. The ADP survey only counts jobs created in the private sector while the Labor Department includes government workers in its figures, which is the reason the behind the discrepancy.

"The report says the economy is expanding," said Hugh Johnson, chief investment officer at Hugh Johnson Advisors LLC in Albany, New York. "You have to really anticipate that it's going to be small businesses that will be the primary source of hiring."

The ADP report pools data from about 340,000 businesses employing more than 21 million workers.