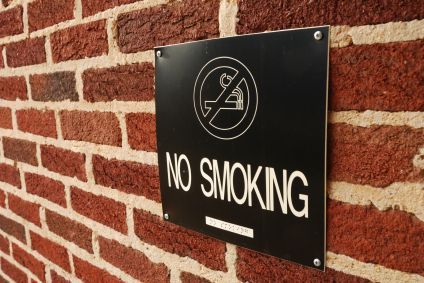 If you want to get a job when the market is tight, the obvious thing is to look where the jobs are. Right now, and probably for a while to come, health care is the place to be. But, in some places, if you don't have healthy habits, you won't be able to get work.

6 ABC Action News reports that St. Luke's Hospital and Health Network in eastern Pennsylvania is one of a growing number of medical centers that will no longer hire smokers.

According to Bob Zimmel, Senior Vice President of Human Resources, "We're a healthcare provider and we should be setting examples, as role models for people. We're also looking at ways to reduce some of our expenses the same as probably every company in this country finding ways to control costs." The cost reduction that he refers to comes from findings that employer's health care costs for smokers are higher than for non-smokers and that productivity of smokers is less when they take cigarette breaks.

In an article in the Monterey County (CA) Herald, Mary Barker of the Community Hospital of the Monterey Peninsula, CA--which also just implemented a ban on hiring smokers--strengthens the economic argument. She cites studies by the American Cancer Society and the Centers for Disease Control and Prevention, which show that workers who smoke miss an average of 6.16 days of work per year because of illness, compared to 3.86 days for nonsmokers. The research also found that smokers visited health care facilities 6 more times per year than non-smokers and that they suffer accidents twice as often.

Whether such hiring ban decisions are being made to encourage healthy habits and to align an organization's missions with staff lifestyles, or for business reasons, they're getting flack in some parts of the country. In Ohio, according to Cleveland-based WKYC, Rep. Stephen Dyer is sponsoring a law that would prevent employers from refusing to hire tobacco smokers. If passed, it would place sizeable fines on employers such as the Cleveland Clinic, Summa Health System, Parma Community General Hospital and Medical Mutual of Ohio, all of whom have policies preventing the hiring of smokers.

The legality of banning smokers the right to work where they choose varies from state to state. Pennsylvania and California are two of the twenty states where, according to 6 ABC Action News, anti-nicotine hiring practices are legal. Ohio, obviously, is not. And, the battle lines are being drawn within states as well as between them.

The Chief Executive of the Cleveland Clinic, Toby Cosgrove, spoke out in defense of his company's policy, reporting that over 6,000 companies in the U.S. have banned the hiring of smokers "to promote a healthy workplace." Standing his ground, he denies that the decision was made to save money. Whatever the reasons, times are a'changing for ciggie tokers and those who employ them.