Social Media Jobs On The Rise 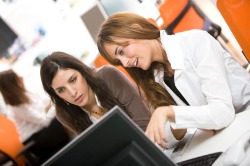 With Facebook reporting a record high number of users at more than 500 million worldwide, it is apparent that people are becoming inextricably woven into the fabric of social media, forming connections with one another that would have been impossible without the Internet. Redefining how people communicate--from tweet, tag to text--social media is also emerging as a powerful force in the corporate world, creating a whole new category of jobs.

Increasingly, employers are posting waves of jobs with "social media" in the title to fill an enormous demand for individuals who can utilize these web-based networks to a company's benefit, U.S. News & World Report noted. According to Indeed.com, one of the largest search engines for jobs, the number of jobs with "social media" in the description has tripled over the past year, surpassing 14,000 jobs.

"It's becoming a vital part of what companies do, and that's good news for job seekers in a market that--admit it--you know is brutal," said Bernhard Warner, editor of Social Media Influence, a London-based industry newsletter.

The most common job titles that include "social media" on Indeed.com are Social Media Strategist, Social Media Manager and Social Media Specialist. The titles and responsibilities, however, vary widely.

"[They range] from community managers to digital strategists who help with the company's overall social media campaign to developers, the people who build the campaigns, Facebook applications, [and] mobile apps," said Adam Ostrow, editor-in-chief of Mashable, a digital media and technology news website.

Some big companies, such as Dell Computers, have started a trend in successfully experimenting with social media marketing, the Orlando Sentinel noted. For instance, last year, Dell reported generating $3 million in sales with links from its various accounts on Twitter, a large social media website that allows users to publish status updates.

"It wasn't until 2009 came around, and initiatives on Facebook, Twitter and other social channels were producing soft and hard ROI [returns on investment] by major brands, that the hiring really started," said Mark Krupinski, social media director for MindComet, an interactive marketing agency.

Some experts, however, are not enthusiastic about the recent spike in social media positions available, according to ConsumerAffairs.com. Curtis Hougland, founder of the marketing and social media firm Attention, warns that the number of job openings in social media has quickly outpaced the number of qualified candidates. The growing demand for these workers has created a burgeoning workforce of self-proclaimed social media experts, some of whom are qualified, but many are not, he said.