Some College Without a Degree Still Provides Employment and Salary Benefits 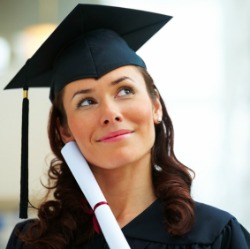 The debate surrounding whether a college degree leads to sufficiently higher earnings to make up for the cost of education has been a widespread and longstanding one. But what about those students who leave before actually earning said degree? Is college still worth it for dropouts? A new study from The Hamilton Project indicates the answer is yes.

The new report suggests that college dropouts make an average of $8,000 more each year than high school graduates without any college, or about $100,000 more in lifetime earnings, even after accounting for the costs of their unfinished educations, notes The Washington Post. In fact, the return on investment for college dropouts exceeds the returns associated with investing in stocks, bonds or a home.

"Of course, the high rate of return associated with attending a few years of college does not imply that dropping out of college is a better option compared to completing a bachelor's or associate's degree. Graduates with a bachelor's degree annually make about $32,000 more than individuals with only some college," the Hamilton Project's researchers noted. Furthermore, college graduates still make about $500,000 more over their lifetime than do high school graduates without any college education.

Washington Monthly suggests that there could be a number of reasons for why college dropouts earn more and have more job opportunities than do high school graduates. For example, taking even a few college courses may help to enhance skills in the job market, especially when those courses are related to a practical field like automotive repair. Another reason dropouts may earn more could be that attending college is often perceived as a reflection of social class and intellectual capability, especially since successful minds like Bill Gates and Steve Jobs dropped out themselves.

The Hamilton Project's findings may cast new light on the aforementioned debate about whether a college degree is worth it. Many opinions on this issue have been tossed back and forth, along with grim data on student debt and employment struggles. The Deseret News reports that student loan defaults are on the rise with $3.5 billion in government and private loans defaulting in the first three months of 2013. Last year, President Reagan's former Secretary of Education William Bennett published a book called "Is College Worth It?," which concluded that it if students complete their degree, attend a well-regarded school, and major in a science, technology, engineering or math (STEM) field, it is.

"College Dropout Earn Less Than Graduates, But Still More Than Those Who Never Went to College," washingtonmonthly.com, June 11, 2013, David Luzer

"Going to college is worth it, even if you drop out," washingtonpost.com, June 10, 2013, Dylan Matthews

"Valuing a dropout: Going to college and not finishing still worth it, study says," deseretnews.com, June 10, 2013, Devon Merling