Some Colleges Allowing Pets On Campus 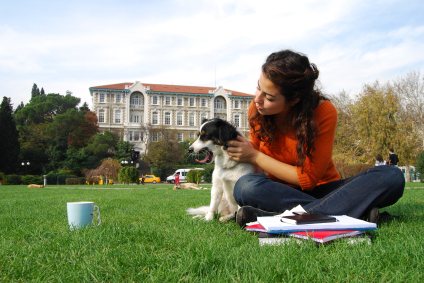 A small but growing number of colleges are allowing students to house pets in their dorm rooms.

The New York Times reports that Stephens College in Missouri is renovating a dormitory specifically for students and their pets, called Pet Central, which will include a kennel on the first floor to provide temporary boarding. College officials hope that allowing pets on campus will smooth the transition for students who are adjusting to college life.

"I recognize this as being a trend that is tied directly to the whole notion of helicopter parenting," said Dianne Lynch, president of Stephens, who was interviewed by the Times. "It's harder and harder for students to leave home. Bringing this particular piece of home with them may make that separation easier."

Lynch added that she expected the number of colleges permitting pets to rise. "Colleges will begin to recognize that this is important to students," she told the Times.

Currently, about a dozen institutions allow pets, including the Massachusetts Institute of Technology, Eckerd College in Florida and the State University of New York at Canton.

Just last month, Central Florida News 13 reported that Stetson University in Florida will be creating 36 pet-friendly rooms in one of its dormitories. Students will be allowed to keep dogs and cats less than 30 pounds. Not surprisingly, Dr. Wendy Libby, the president of Stetson, is also the former president of Stephens who introduced the pet program there.

According to Mike Robilotto, director of residence life at Eckerd, the pet privilege is a huge draw for students. "People come from long distances and it makes them feel like home to have their family pet," he told Petside.com in an interview last year. "There's always a waiting list for the pet housing. When someone moves out, someone is ready to move in with their pet."

She noted that allowing students to bring their pets helps them cope with homesickness. "A lot of people," she told Petside.com, "when they bring their animals with them, feel more comfortable."

"Pets at College Can Ease Homesickness," Petside.com, May 4, 2009, Maryann Mott