Some Colleges Decide To Cut Tuition And Fees For Next Year 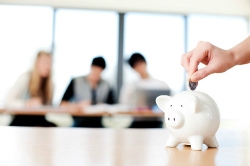 In an attempt to attract students to their schools and to keep enrollment rates up, a number of private colleges are decreasing tuition rates next year.

One school is Cabrini College located in Delaware County, Pa., according to the Daily Times. Students at the school should see tuition drop 12.5 percent for the 2012-2013 academic year. Administration at the school indicated that the decrease in tuition was enacted to help middle-class families and not because of financial difficulties at the school.

"The board of trustees believes that this is the right thing to do--for students and for the college as a whole as we seek to live our mission of providing an education of the heart," Cabrini President Marie Angelella George was quoted as saying in the Daily Times.

Students should find next year's cost of tuition at the school at $28,090, a drop for more than $4,000 from the $32,266 for the current year. Furthermore, the school board decided that tuition and fees would not increase above $30,000 again through at least May of 2015. School board trustees have also made it a priority to keep grants and merit scholarships at their current levels, which could be helpful to the 98 percent of beginning undergraduate students who were said to have received grants or scholarships this school year.

"While other colleges have reduced tuition and fees recently, we believe that Cabrini College is the only institution to do so without reducing the dollar amount of scholarships for returning students," Vice President of Enrollment Management Dennis Kelly was quoted in the Daily Times as saying.

According to CNBC, Cabrini College isn't the only school reducing tuition--the University of Charleston in West Virginia is also cutting tuition costs. In fact, the school is planning to cut tuition 22 percent next year, which officials hope will help attract students who might not otherwise be able to afford college.

"We are taking this move because we're concerned about conceptions middle-class families have about private college tuition being out of reach and we wanted to make a statement that that's not the case," University of Charleston President Edwin Welch was quoted as saying.

The school, founded in 1888, has approximately 1,400 students and the tuition rates for full-time incoming students should drop to about $19,500 for the 2012-13 school year, according to CNBC. Welch said the cuts won't affect the quality of education.

"We've been a leader before so we're not changing anything we're doing except for the price," said Welch to CNBC.

According to CNN Money, several other schools are cutting tuition for the 2012-13 school year or have already made cuts for the current year. These include Lincoln College in Lincoln and Normal, IL (24 percent cut starting 2012), Seton Hall University in South Orange, NJ (61 percent cut for 2012), and The University of the South in Sewanee, TN (10 percent cut in 2011).

However, unlike Cabrini College, Lincoln College plans to cut the amount of financial aid available to students.

"Like most private colleges, we have a sticker price and then we discount tuition depending on a student's academic profile," Lincoln College President Jon Astroth told CNN Money. "So when we reduce our sticker price, we'll reduce the discounts we give in institutional financial aid."