Some Say Extended Unemployment Benefits Are A Disincentive 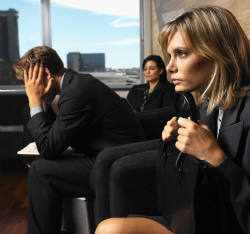 As the debate over extending unemployment insurance continues, people are starting to ask, "Do prolonged benefits make the unemployed less motivated to look for work?"

According to Senate candidate Sharron Angle, it does. The Washington Postreports that Angle has been criticized for saying that the unemployed are "spoiled". "What has happened is the system of entitlement has caused us to have a spoilage with our ability to go out and get a job," says Angle. In a recent interview, Angle clarified her statement, saying that the jobless need to make a choice between unemployment benefits and returning to the workforce and that the government should provide a supplement when people take low salaries.

Angle is not the only one making this argument. According to International Business Times, earlier this year Senator Jon Kyl (R-Az.) said, "Continuing to pay people unemployment compensation is a disincentive for them to seek new work."

Karl Dinse, managing partner for a recruiting firm in Sacramento, CA told The Wall Street Journal that there is some truth to Kyl's argument. While recruiting for engineering positions that would pay $60,000 a year, Dinse says he "called several engineers that were unemployed. They said, nah, you know, if it were paying $80,000 I'd think about it."

Paul A. Johnson was laid off in 2009. After losing his $65,000 a year salary, he began collecting $475 a week in unemployment insurance. Although he received a few job offers, he said the pay was not enough. "I didn't see a point," he explains.

These examples have caused some economists to believe that prolonged benefits can be dangerous. Michael Tanner of the Cato Institute, a think tank in Washington D.C., says, "The fact is, when you have a check coming in, even if it's a fairly low check, you're less motivated to either look for work or accept less optimal jobs."

However, others says today's economic climate is different. The Wall Street Journal points out that this recession is deeper, longer and has put more people out of work than any other post World-War II recession. Because of this, many feel the disincentive argument so many Republicans are sticking to does not apply to today's economy. Lawrence Summers, current director of the White House's National Economic Council, wrote in 1993 that "government assistance programs contribute to long-term unemployment". However, after The Wall Street Journal ran an editorial on this in April, he responded, "In the wake of the worst economic crisis in eight decades...there can be no doubt that the overwhelming cause of unemployment is economic distress, not the existence of unemployment insurance." International Business Times adds that a report by the U.S. Congress Joint Economic Committee shows that most disincentive arguments are out of date.

With five unemployed workers to every open position, many have no choice. Rick Jewell told The Wall Street Journal he is tired of "not being the breadwinner" and looks for work every single day. After losing his job in December 2008 and exhausting unemployment insurance early June, he and his wife now depend on her $480 a week job.

After running out of benefits, Gale Satchell took a part-time job at a local Dollar Tree Inc. She works 8 hours a week and earns $58. She has been looking for work since losing her job in 2007, before applying to unemployment insurance, and still has not found something more stable.

Although attitudes and circumstances may vary, most workers do not risk holding out for an ideal job. Phillip Levine of Wellesley College conducted a study on jobless benefits in 2000 and confirms that when jobs are scarce, disincentive to look for work is minimal.

"Sharron Angle" We should cut unemployment benefits to encourage jobless to go back to work," voices.washingtonpost.com, June 30, 2010, Greg Sargent