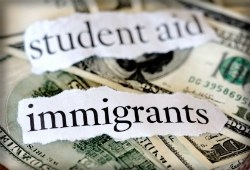 A number of states and colleges are making efforts to assist undocumented immigrants who cannot afford to pursue higher education.

Last week in Albany, New York, the state Assembly overwhelmingly voted in favor of creating a privately financed scholarship fund to help children of illegal immigrants pay for college. The bill will soon go to the state Senate, where it faces an uncertain future.

"This is a historic piece of legislation that will allow these children the opportunity to get money to go to college," said Assemblyman Francisco Moya (D-Queens), who sponsored the bill and was quoted by the New York Daily News. "This will open up a pathway for those students who can't afford a [college education]."

The bill is being seen as a first step towards the Development, Relief and Education for Alien Minors (DREAM) Act, which would allow for government-funded tuition assistance for the children of undocumented immigrants. But the DREAM Act remains controversial and has failed to pass in New York's state Senate or Assembly. A federal version of the DREAM Act has also failed in pass in Congress.

Some said that the New York bill encouraged illegal immigration. "If you are a good parent south of the border right now, you look at this and say well, of course I want to go there, look at the benefits we are going to get," said Assemblyman Dean Murray (R-Suffolk), who opposed the bill and was quoted by the NY Daily News.

Meanwhile, as reported by USA Today, a number of colleges are trying to ease tuition for undocumented immigrants. At Dominican University in Chicago, for example, the school offered $274,000 in financial aid to 17 undocumented students.

"Is it controversial? Yes," said Donna Carroll, president of the university, who was interviewed by USA Today. But, she said, "it's against the law to discriminate against any student group. You need to start from that premise."

Nevertheless, full acceptance of undocumented immigrants at the nation's colleges is still a long way off, as evidenced by a measure rejected in Colorado last month. As the Associated Press reported, state Republicans rejected legislation that would have allowed illegal immigrant students to attend state colleges at discounted tuition rates.