Some States Are Left Out As Govt. Gives Out $500 Million For Education 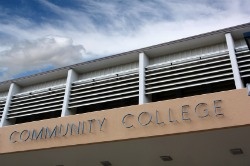 The federal government announced Monday it would give $500 million in grants to community colleges nationwide to help promote job training programs and workforce development. The money is the first of a total $2-billion package that will be distributed over four years and is designed, along with President Obama's recently proposed American Jobs Act, to increase opportunities for the unemployed.

"This initiative is about providing access to training that leads to real jobs," Secretary of Labor Hilda L. Solis noted in a U.S. Department of Labor press release. "These federal grants will enable community colleges, employers and other partners to prepare job candidates, through innovative programs, for new careers in high-wage, high-skills fields, including advanced manufacturing, transportation, health care and science, technology, engineering and math occupations."

These grants are the first installment in the Trade Adjustment Assistance Community College and Career Training initiative, with monies being given to 32 grantees this time around, according to the DOL. The program is being coordinated with the U.S. Department of Education.

Not all community colleges or states received grants, however, Inside Higher Ed noted. Connecticut, Louisiana, Nevada and New Mexico were completely excluded. Florida, Indiana and Iowa each received part of a shared grant. The fact that powerful states were left out shows how strictly the federal government scrutinized applications, David S. Baime, senior vice-president of government relations and research for the American Association of Community Colleges, told Inside Higher Ed. More than 200 community colleges applied, with proposed projects totaling $3 billion.

Officials from the Education and Labor departments said all states eventually will receive at least $2.5 million. Program directors will help the community colleges in those states develop qualifying projects.

Honolulu Community College should be receiving the largest grant of all: $24.6 million for its "Just in TIME (Teaching Innovation in Math and English)" developmental-training program, according to The Chronicle of Higher Education. The goal of this program is to reduce the high number of students enrolled in remedial mathematics and English classes.

In New Hampshire, Great Bay Community College should be receiving $19.9 million to revamp an advanced manufacturing program offered by all schools in its consortium. In Ohio, Cincinnati State Technical and Community College will receive $19.6 million to work with community colleges in other states to educate and train low-skilled, laid-off employees for health care jobs. In Colorado, seven community colleges in the Community College of Denver consortium, slated to receive $17.2 million, will provide online and hybrid educational programs about energy.

States in which multiple projects received funds include:

The initiative's remaining $1.5 billion in job training money is far from guaranteed, the AACC and others told Inside Higher Ed, as it likely will be a target for budget cuts. The education sector, however, will push hard for those grants.

"We're committed to fight for this in the future years," said J. Noah Brown, president and chief executive officer of the Association of Community College Trustees, in Inside HigherEd.

Career and Education News
Home >
News>
Some States Are Left Out As Govt. Gives Out $500 Million For Education