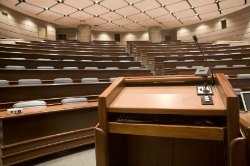 Just a few short years ago, applications to many of the nation's top MBA programs were surging. New reports suggest that is changing, leaving many business programs with a difficult lesson in supply and demand.

The Wall Street Journal reports that business school applications from MBA candidates have declined sharply in the last year. Applications have slumped at nearly a dozen of the top 30 business schools in the U.S., including prestigious institutions such as Columbia Business School, New York University's Stern School of Business and the Yale School of Management.

Timothy Smith, senior associate director of admissions and financial aid at Indiana University's Kelley School, told the Indianapolis Business Journal that he believes more choices -- including part-time and online programs -- combined with growing competition from "second-tier" schools has contributed to the dip. Enrollment for this year's incoming MBA class at Kelley dropped to 177 students from 213 in 2011.

"The pool has been fragmented most aggressively this year with part-time, online, and other options," explained Smith in the Indianapolis Business Journal. "There is no doubt about it, the number of students hasn't increased, and there are more players at the table. At the same time, [employer] sponsorship for full-time MBA programs is almost nonexistent, and doing an MBA part-time or online can be an attractive offer for some students, especially when there is funding available."

Liz Riley Hargrove, associate dean for admissions at Duke's Fuqua School of Business, shared the same sentiment. "It was just a really competitive environment, and I think it impacted everybody's yield this year," she told the Indianapolis Business Journal.

The Wall Street Journal notes, however, that while many schools are reporting an overall decline in applications for their traditional two-year programs, demand for one-year programs is more promising: Northwestern University's Kellogg School of Management saw a 6 percent growth in its one-year MBA program year over year. Applications to its two-year program, on the other hand, dropped by 7 percent.

"I think schools have about as much wisdom predicting application volume as economists do predicting employment," Derrick Bolton, assistant dean and director of MBA admissions at the Stanford Graduate School of Business, told The Wall Street Journal.

Another potential contributor to the decline in applications could be reduced need for MBA degrees in the business world. According to another article from The Wall Street Journal, a recent study found that just 40 percent of CEOs at the nation's top companies hold MBAs. Furthermore, CEO hopefuls may be able to get by without a college degree at all: Nearly 7 percent of consumer-industry CEOs didn't even graduate from college, yet The Wall Street Journal notes most people still need a college degree to get to the top.

Still, whatever may be contributing to a decline in MBA program applicants, waning competition may benefit those who do apply. According to the Indianapolis Business Journal, a smaller pool of applicants has reduced selectivity by a few points at many prominent business schools. Hagrove notes that competition is still stiff among some groups, however, including women, underrepresented minorities and students from nontraditional work backgrounds.