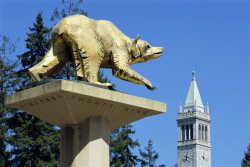 The University of California system is expecting a record number of out-of-state and international students for Fall 2010, reported the Los Angeles Times. The increase is believed to be part of the UC's plan to make up for the lack of state funding.

UC institutions estimate that more than eight percent of the 37,151 incoming freshman class will be from out of state or overseas, with the highest concentrations at UC Berkeley and UCLA. This figure was based on data collected from submitted Statements of Intent to Register (SIR) and is up from 6 percent in 2009. "All campuses were more conscious this year of nonresident enrollment, and three of the campuses--Berkeley, Los Angeles and San Diego--where especially effective in enrolling a larger number of nonresidents," said Susan Wilbur, director of undergraduate admission for the University of California.

Because of numerous education budget cuts, the UC system has been suffering. ABC News Channel 7 reported that out-of-state students typically pay about $22,000 more than in-state students, which has led many people to believe that the UC's nonresident recruitment efforts are a response to the drop in state funding. The Daily Californian reported that UC Berkeley alone admitted 13 percent more nonresident students for the fall semester than last year. Los Angeles Times stated that UCLA expects non-Californians to make up 15 percent of its new freshman class, up from 11.4 percent in 2009.

Furthermore, a UC commission planning the system's future suggested raising its percentage of non-California students to 10 percent. Although this number is low compared to other states, some politicians and educators are alarmed by the idea. Patrick M. Callan, president of the National Center for Public Policy and Higher Education, fears that state legislators may see nonresident tuition as an excuse to cut funding even more. "I understand the financial constraints they are in, but this should have been one of the last resorts, not one of the first," he said.

The increase in nonresident admission has also caused concern that in-state students may find it harder to gain acceptance at UC schools. ABC News channel 7 reported that UCLA is planning to accommodate more out-of-state students and international students by expanding its incoming freshman class. In a press release, UC Berkeley also said it has not reduced the number of seats for California residents and that its enrollment targets for fall 2010-11 are in line with state funding levels.

UC Berkeley also adds that nonresident student recruitment has been a continued effort as it brings geographic diversity to the campus, which has been an important educational goal for the institution. According to the press release and The Daily Californian, Chancellor Robert Birgeneau said the money gained from out-of-state tuition will help improve the quality of gateway courses and will also go towards recruiting and retaining minority students. Claudia Luther, a spokesperson for UCLA, told ABC News Channel 7 that the shift in enrollment will have great overall benefits. Los Angeles Times also reports that Thomas Lifka, UCLA's associate vice chancellor for student academic services, said UCLA wants both the revenue and cultural and intellectual diversity that out-of-state students bring. He also pointed out that people seem to have forgotten that the state "is not meeting its responsibility to subsidize students".

Although some students told ABC News Channel 7 that they are seeing negative consequences, others see the shift as a good thing. "You meet so many cool people. I just got out of class, and only two of us are from California, and everyone else is from somewhere else," said Laura Mead, a UCLA student.

According to Los Angeles Times and The Daily Californian, attendance may still be in flux as not all students who submit an SIR actually end up enrolling in the fall. Actual enrollment numbers will not come in until August or September.