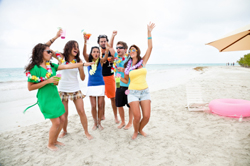 The month of March is known for spring break on most college campuses. During the much anticipated week-long break, students across the country head to warm climates to soak up some sun and let loose before getting bogged down by school work again.

However, just as students head out to the beach--or to the tanning salon in preparation for the beach--a new study showed that affluent young white women are nearly six times as likely to develop melanoma as their poorest counterparts, reported HealthDay.

The study examined the relationship between melanoma cases, UV exposure and socioeconomic status in data from 3,800 white girls and women in California aged 15 to 39 in two periods--January 1988 to December 1992 and January 1998 to December 2002.

Among the woman, 3,842 cases of malignant melanomas were identified. Interestingly, diagnoses increased in the three highest socioeconomic levels and women in the top two levels were linked to higher rates of melanoma. Furthermore, among teens, the rate of melanoma has gone up nearly three percent a year in the last 20 years.

Researchers speculated that the higher rates are most likely due to the fact that affluent young women are more likely to sun-bathe during vacations and frequent tanning salons year-round.

"These are young girls--15 to 39--and they shouldn't be getting cancer," said study co-author Christina A. Clarke in HealthDay.

The study comes at a time when students and advocates are trying to raise awareness about the dangers of melanoma and indoor tanning salons, particularly among college students who are usually targeted by the tanning industry.

Meanwhile, according to The New York Times, the FDA approved the first drug shown to prolong the lives of people with melanoma. The drug, called Yervoy, extended survival in patients with metastatic melanoma by nearly 4 months, compared to patients who received less effective treatments. Yervoy is considered an immunotherapy treatment, meaning it uses the body's own immune system to fight tumors. It is the first drug to be cleared for advanced melanoma since 1998, when interleukin-2 was approved.

However, before you start thinking you can just get Yervoy to reverse the effects of skin cancer, keep in mind that a complete course of treatment is expected to cost $120,000.