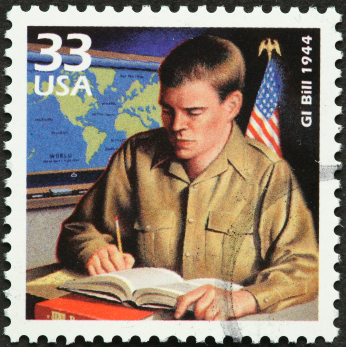 The Department of Veterans Affairs expects that processing Post 9/11 GI Bill education benefits will be speedier this spring.

VA faced criticism last year when the new GI Bill resulted in a flood of applications that caused a backlog. Many universities responded by deferring veterans' tuition payments, while some students were forced to take out loans, use credit cards and even consider dropping out of school to make ends meet. VA responded to the situation by making advance payments of up to $3,000 to more than 79,000 students.

This spring, the department plans to do better. VA officials announced yesterday that they have already processed over 72,000 of the 103,000 spring enrollments received and plan to complete them all by February 1.

"Only by VA and all of our partners working together will students be better served," said Mike Walcoff, the department's acting undersecretary for benefits. "We are making a concerted effort to reach out to everyone to provide the timely benefits that those who served our nation deserve."

The Post 9/11 GI Bill, which went into effect last August, covers a generous portion of tuition, fees, housing, books and supplies for individuals who have completed at least 90 days of collective service on or after September 11, 2001, or those discharged from the service after 30 days because of a disability.

The department tackled the surge in applications last year by hiring 530 employees, which brought the total number of education claim processors to 1,200. Employees were required to work overtime, and officials hired an outside contractor to assist as well.

Army Times reports that VA Secretary Eric Shinseki also urged schools to submit applications as soon as possible to help speed up the process. "Prompt submission of information from schools each term helps avoid delays in tuition and fee payments to schools and, in turn, applicable payments to our veterans," he said in a statement which was quoted by Army Times.

VA officials are also instructing institutions to submit enrollment information for students without waiting for an official eligibility certificate from VA indicating the benefits earned.