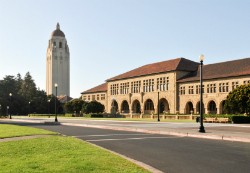 After a three year pilot program, Stanford University made the decision to have optional alumni interviews as a part of the freshman application process.

According to The Stanford Daily, the decision was approved by the Faculty Senate Committee on Undergraduate Admissions and Financial Aid in April after the three year pilot program proved to be successful and "overwhelmingly popular". The pilot started in 2008-09 with just 378 alumni interviewers in Atlanta, Denver, Portland, New York and London. In the following academic year, the program had 1,061 interviewers and expanded to Philadelphia, Raleigh/Durham, Minneapolis-St. Paul, Washington D.C., Maryland, Massachusetts and Virginia.

As in the pilot program, alumni interviews will be completely optional, reported the Stanford Report. Alumni will continue to reach out to applicants directly if an interview is available in their region and applicants cannot request interviews.

The alumni interview is intended to provide the Office of Undergraduate Admission with a more holistic perspective of each applicant, providing information that might not be shown on paper. It is also an opportunity for candidates to get more in-depth information about life Stanford.

"Our ultimate goal is an exchange of information between applicants, alumni and admissions officers that will help lead to the best fit between university and student," said Richard Shaw, dean of undergraduate admission and financial aid. Furthermore, Dean Shaw stressed that the interviews are "conversations, designed to make [Stanford] applicants more comfortable, to give them a greater voice in the admission process and further insight into Stanford."

According to Inside Higher Ed, alumni interviews are the norm at elite universities, such as Harvard and Yale. Such practices, however, have been criticized by many, with some arguing that alumni can favor wealthier applicants, who are often already in their social circles. Inside Higher Ed also noted that Bloomberg recently reported that alumni had complaints as well, saying that interviewing is not worth their time because they do not have enough influence in the decision process.

Dean Shaw disagreed, however. He argued that the pilot program interviewed applicants from different demographic groups and that applicants from disadvantaged backgrounds benefitted from alumni interviews just as much as wealthy applicants did. Moreover, alumni reported that what mattered to them was that applicants were honest during the interviews, not whether they could successfully market themselves. Dean Shaw also noted that alumni interview feedback influenced the final decision in about 10 percent of cases.

According to the Stanford Report, the program will include Chicago, Dallas, Houston, Seattle, Singapore, Oregon and Minnesota for the 2011-12 admission cycle. Inside Higher Ed added that Stanford plans to continue expanding its alumni network so that within three years, all applicants could potentially be offered an alumni interview.