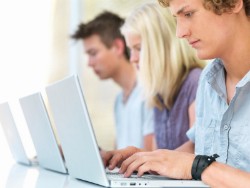 Back in 2007, students of professor B.J. Fogg's "Facebook Class" at Stanford University never thought the class would help launch their careers or turn them into millionaires. In fact, according to VentureBeat that was never Fogg's intention. The class was supposed to give students hands-on experience in software development as well as analyze what makes an application successful. Students were to design a Facebook app and would be graded based on how many Facebook users actively used their apps.

However, according to Business Insider, the 31 applications that students created were used by some 16 million users and became bigger successes than anyone could have imagined.

As The New York Times reported, not only did the class help jumpstart more than two dozen students' and teachers' careers and fortunes, it completely changed the tech industry's business model.

Once upon a time, start-ups required lots of money, time and people. But thanks to free open-source software, cloud services and ad networks, costs are much lower and revenue comes in more quickly. For instance, Fogg's students were encouraged to create "no-frills" apps then distributed them quickly and perfected them later--a process that took some students just a few days or hours. As a result, those apps, which were free to users, generated approximately $1 million in advertising revenue.

"Everything was happening so fast," said former Facebook Class student Joachim De Lombaert. "I almost didn't realize what it all meant."

De Lombaert and his team created the app "Send Hotness" which netted $3,000 a day. According to Business Insider, the group sold their app for 6-figures and De Lombaert and teammate Ed Baker later founded Friend.ly, a social networking start-up.

The New York Times noted that while many students turned their app assignments into successful companies, others--like Robert Cezar Matei who, after graduating from Stanford, used the skills he had learned in Fogg's class to create an app in multiple languages--sold their businesses to companies such as Zynga.

The class projects were so successful that the end of the quarter presentations attracted more than 500 people, including many investors.

"The Facebook platform was taking off, and there was this feeling of a gold rush," said Mike Maples Jr., an investor who attended some of Fogg's classes and eventually backed one of the start-ups.

Fogg, agreed, saying that back then the land was "ready to be harvested". He pointed out, however, that times are different as Facebook now tightly controls the spread of applications. Luckily, some of his students turned CEOs, VPs and millionaires were in the right place at the right time.

"These Stanford Students Made Millions Taking A Class About Facebook," businessinsider.com, May 9, 2011, Alyson Shontell