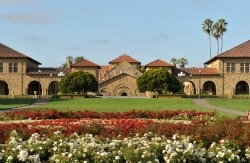 "CUNY welcomes the opportunity to partner with Stanford University, with City College as our lead institution," CUNY Chancellor Matthew Goldstein said in a CUNY press release. "Our collective strengths will help pave the way towards the establishment of world-class science and engineering education opportunities. The two beneficiaries will be our students and the people of New York City."

At the same time, but as not part of the [email protected] collaboration, Stanford is preparing a proposal to build a graduate applied science campus on Manhattan's Roosevelt Island. Construction costs for a new campus would likely exceed $1 billion. Bids are due by October 28, and the city will choose a winner by year's end. If Stanford is the winning institution, its new campus could open in late 2016.

As part of the [email protected] partnership, Stanford and CUNY would open a demonstration site on the City College of New York campus, offering Stanford's undergraduate programs in entrepreneurship, technology and management to City College and Stanford students, The Stanford Daily reported. Those students would earn City College degrees, but Stanford engineering and entrepreneurship professors would advise them on getting their technology ideas to market, SFGate reported.

Stanford would renovate and use up to 20,000 square feet of classroom space at CCNY until the new facility is completed, noted The Stanford Daily. Additionally, Stanford would host CCNY students each summer in Northern California, in its Research Experience for Undergraduates Program.

"This collaboration offers our students the opportunity to learn side by side with peers enrolled at one of the world's finest private universities," CCNY President Lisa S. Coico said in the press release. "[email protected] will create partnerships between our research-active faculty and their colleagues at Stanford, who helped create and sustain Silicon Valley, and these partnerships will incubate innovation and entrepreneurship in the technology sector right here in New York."

"...We anticipate it will be a longstanding collaboration, regardless of the success of our applied sciences bid," Lapin said. "We would look forward to a long and fruitful association with CCNY and CUNY."

"Stanford University Teams Up with The City University of New York and City College in New Engineering and Science Collaboration in NYC," ccny.cuny.edu, October 11, 2011