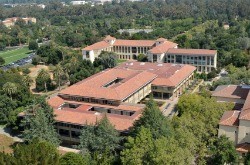 A $150 million donation to Stanford University's Graduate School of Business is aimed at developing programs to help decrease poverty worldwide, according to an announcement school officials made on Friday.

The donation, made by Menlo Park, Calif.-residents Robert and Dorothy King, includes $100 million to start the Stanford Institute on Innovation in Developing Economies, or SEED, and $50 million in matching funds to promote donations to Stanford programs focused on poverty, according to the The Chronicle of Higher Education.

SEED instructors are expected to provide courses in social entrepreneurship and design, and to help lead projects related to lightening the world's poverty load, reported The Wall Street Journal. Students are also expected to take lead roles in management and research related to agriculture, banking, health care, communication, transportation and more in various countries, according to the Los Angeles Times.

"We know there are people out there who can make this world a better place, and we want to get behind them," Robert King told The Chronicle of Higher Education.

According to the Los Angeles Times, Robert King earned a master's degree in business administration from Stanford in 1960 and later become a successful investor in Silicon Valley. King invested in the Chinese Internet search company, Baidu, Inc., noted The Wall Street Journal. He was also a partner in Menlo Park's Peninsula Capital.

"We believe that innovation and entrepreneurship are the engines of growth to lift people out of poverty," King was reported as saying in the Los Angeles Times.

The Kings' donation is described as the second largest publicly-disclosed gift ever made to the school. The most significant in size, of some $400 million, was donated in 2001 and came from the William and Flora Hewlett Foundation. That particular foundation has made grants since the late 1960s to help solve environmental and social problems, according to its website. The school also received a $105 million donation in 2006 from Nike Inc. co-founder Philip Knight for help in constructing a new campus, the Wall Street Journal reported.

The Kings previously looked at ways to make a mark in the world. In 1995, they developed the Thrive Foundation for Youth, an organization aimed at benefiting youth aged 10 to 17 and their parents, the Los Angeles Times reported. The Foundation now runs independently of the family, the Foundation's website indicated.

The Kings' $150-million donation is seen as a positive sign during a difficult economic period for the U.S. and many schools of higher education. However, Stanford appears to be performing well in the donation field.

As noted by The Wall Street Journal, domestic donations made Stanford the highest ranked higher-education institution on this year's Chronicle of Philanthropy list of the 400 largest nonprofit organizations. The school was ranked 20th among all charities.

King told The Wall Street Journal that he made the donation to the school because of his past connection there and that the donation was being made now because "the world needs it".