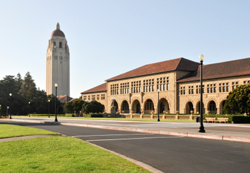 Stanford University faced questions Wednesday about whether it provided its student athletes with a list of allegedly easy courses.

The controversy emerged as two student reporters from California Watch discovered the list, which was distributed to student athletes by the University's Athletic Academic Resource Center. The list has long had a reputation among some athletes of highlighting easy courses. Karissa Cook, one of Stanford's women's volleyball players, said, "It's definitely not going to be a hard class if it's coming off that list."

Stanford spokeswoman Lisa Lapin told Inside Higher Ed via email that the list was never meant to direct students to easy courses. Instead, Lapin noted, the criteria required that classes "meet common General Education Requirements; (are) offered at times of day when more athletes are available; (are) 1- or 2-unit seminars that athletes often will need to make sure they are meeting their 12 unit enrollment requirement (i.e. the dance class); (are) very popular classes with all undergraduates; or (could) provide information that would be particularly helpful to athletes, such as public speaking, financial literacy, and entrepreneurial thought."

But Ryan Mac, one of the reporters who uncovered the list, told San Francisco's ABC7 that many of the courses did not meet the criteria Lapin provided. "Some of the classes on the list didn't fulfill any general education requirements," said Mac. "There's things like social dance, which is a dance class."

Lapin told Inside Higher Ed that she could not explain why the list failed to include some courses that met the criteria, but included others that did not.

Students learned about the list mostly by word of mouth. Susan Simoni Burk, a former Stanford athletics official who oversaw the center's advising program between 1995 and 2009, told ESPN that "[Copies of the list] were put on the table, and unusually they were gone within the first day."

Lapin told Inside Higher Ed that despite reports that Stanford had discontinued the list, no formal action had taken place. Meanwhile, ESPN reports that Stanford's athletics department denied the list even existed when Sociology professor Cecilia Ridgeway contacted them to request that one of her courses be removed.

Gerald Gurney, president of the national Association of Academic Advisers for Athletics, told California Watch that while he was unaware of the circumstances at Stanford, a list that indeed directs students toward an easier course load is unethical.

"The course list in itself isn't a violation," said Gurney, "but promoting courses because they're easy isn't, ethically, something that academic advisers should do."