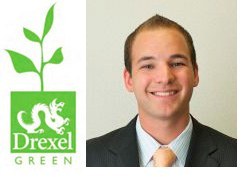 How many receipts do you have in your wallet? No, really, how many? And how many of those will you never look at again?

Bradley Ericson, the 19-year-old Drexel University student whose idea to eliminate paper receipts on college campuses has earned him accolades, is willing to bet that you have a lot of them.

Ericson, now a sophomore at the University's LeBow College of Business, found inspiration for his company, 3SecondReceipts, when he found himself up to his ears in little slips of paper.

While searching for an idea to enter into a business plan competition his freshman year, Ericson was at a loss. It wasn't until he was paying for a slice of pizza at a University cafeteria that an idea flashed in his mind: What if the paper receipts issued to students could be eliminated?

"I was just going through my normal day when I started to realize that every time I bought [food in the cafeteria] I'd get this receipt, which is supposed to tell you how much money you have left on your meal plan," Ericson said. "But at Drexel freshman are required to have an unlimited meal plan so it was literally the most pointless receipt I have ever seen. This receipt would print and it would have the date but nothing else. It was pointless. So people would just throw it on the ground or leave it on the counter and the guy would have to come around the counter and clean them all up. I thought that there had to be a better way and that maybe I should look into some kind of receipt alternative."

Within the month Ericson was developing the idea into a plan for the business competition, along with his brother Timothy, then a senior at Drexel. What they realized is that digitizing receipts could, in fact, be done and that no other company had taken steps to do so.

"What we aim to do is to is to eliminate paper receipts at the point of sale," he said. "[The receipt] is a costly thing; it costs money for the retailers, there is environmental waste and there is consumer inconvenience."

For tiny slips of paper, the environmental impact of receipts is huge. With 600,000 tons of receipts issued each year, more than 10 million trees are felled and millions of gallons of water and oil used to produce them. Further, the majority of receipts are printed on thermal paper which is not recyclable, making paper the single largest category of waste and comprising 25% of the waste in landfills.

For the Drexel competition the duo focused on large retailers but soon realized that their idea needed some fine-tuning.

"We placed third place in the business plan competition and I was pretty upset," Ericson said with a wry laugh. "I am a perfectionist and I just though, 'Hey, why didn't I win?' But everything happens for a reason because it was an eye opener that I needed to change my idea. We started then to focus on colleges and universities because we were in the perfect community to do it." Drexel soon became 3SecondReceipts' first client.

Here is how the system works: Students deposit money into a meal plan account and can then eat at any of the University's cafeterias. Instead of being issued a paper receipt, with the date and the balance that remains in the student's meal plan account, the card is swiped and the information is stored in the University's computer system. To check meal plan balances or to track expenses, students simply log onto the University system, enter their ID number, and itemized receipts are available to view. The software, which was developed by Ericson's partner Shishir Bankapur, will eventually be used in all Drexel University retail outlets. (Ericson's brother Timothy is the CEO of his own venture but has a small stake in 3SecondReceipts.)

As he revamped his idea, Ericson also held down an internship at Johnson & Johnson, as a full time brand marketing specialist. The job not only bolsters the 19-year-old's resume but paid for Ericson to launch his company without investors.

"This is one reason that I am really excited that I am here at Drexel," Ericson said. " [Students] do three six-month internships and get paid as if it is a full time job. I have been working at Johnson & Johnson and being paid such a high salary that I have paid for nearly everything myself."

An entrepreneurial star is born

Revamping his original idea not only brought Ericson his first client, he also go the blue ribbon he was after, and on a much larger scale. Ericson, whose entry video became a viral hit on YouTube, was recently named Entrepreneur Magazine's College Entrepreneur of 2009.

Ericson's awards and real world accomplishments alike have impressed the administration of LeBow College of Business, and not just just because of the accolades.

"We certainly are very, very proud of Bradley and his accomplishments and not just because the are entrepreneurial," said Ian Sladen, director of undergraduate programs. "We are also proud because he is doing something that lends to the social responsibility aspects of being an entrepreneur. In this day and age, it is important that we keep our thoughts and minds on sustainable business solutions."

3SecondReceipts and its digitized receipt software recently were given the seal of approval from the Drexel technology team and should be up and running on University systems by Spring 2010. Towards the end of this year Ericson hopes to begin expanding into other colleges and universities, taking over campuses one receipt at a time.