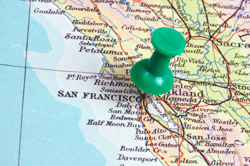 Start-up tech companies have begun migrating to San Francisco instead of Silicon Valley, driving up demand for rental space in the city's South of Market area (known locally as SoMa). The Wall Street Journal reports that social-gaming company Zynga Game Network Inc. announced a seven-year lease last month for a 270,000-square-foot space, one of the biggest commercial-rental deals San Francisco has seen in years. Other start-ups such as Twitter, another social-gaming start-up Booyah Inc. and help-desk software start-up Zendesk Inc. have also been drawn to San Francisco over Silicon Valley due to the cheaper office rents.

The city's plethora of talented designers, thanks to San Francisco's vibrant advertising, artistic, and publishing scenes, also appeals to these companies. The San Francisco Chronicle explains that the city is brimming with specialists in social media, customer service, and marketing, essential skills for both attracting and serving user communities. The South of Market area further benefits from its proximity to Caltrain, allowing techies from both the Peninsula and the East Bay to work there.

According to the San Francisco Examiner, the buildings in SoMa themselves have helped draw tech companies there as well. Back in the late 1990s, Internet companies bought up numerous warehouses, but all that faded with the dot-come crash in the early 2000s. Now, along with the start-ups, major companies can expand too. Google snatched up a 263,000-square-foot space from a biotech firm, enabling them to accommodate over 1,600 new employees.

San Francisco Mayor Gavin Newsom told the Wall Street Journal, "After the dot-come implosion, everyone had an alternative [for where to locate]. Now, jobs are chasing people." This influx of tech firms has certainly boosted San Francisco's floundering commercial real estate market. For the first time in two years, that market logged a quarter of positive absorption.

Yet this activity doesn't include all technical areas, the Wall Street Journal adds, citing the tendency of computer-hardware makers to settle in Silicon Valley due to its abundant supply of talented engineers. The companies moving to San Francisco are typically "smaller, Web-centric companies, especially those in social games and mobile software." The San Francisco Chronicle, however, praises this diversification, stating that it gives "San Francisco a chance to lead in one of technology's most bullish sectors--the sale of software as a service."

Still, the less optimistic Wall Street Journal speculates on how long this tech boom can last since start-ups, by their very nature, are unproven. Many of the Web-based companies filling up the South of Market area haven't begun generating revenue yet let alone profit. These small firms also tend to use the same venture capitalists, putting them all at risk if funding disappears.

But the Journal acknowledges that this current level of tech activity has been among the most sustained in a decade. The San Francisco Chronicle seems to think it will last since many of the SoMa start-ups have shown far more discipline in an effort to avoid the excesses of the dot-com era. For example, ShopItToMe's founder and his two collaborators relied only on themselves until their company became profitable, then they pursued angel and venture capital investments.