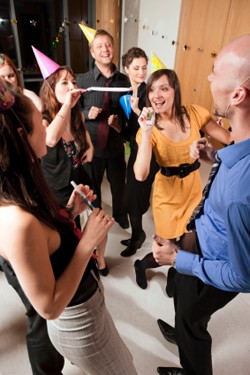 With start-ups popping up just about everywhere and snatching up computer whizzes, companies have started beefing up their perks to woo top talent as well as keep current rock star employees.

As The Wall Street Journal reported, fierce competition among start-ups--as well as big names like Google and Facebook--has made companies step up their perks. With free breakfast, lunch and dinner now the standard at many companies, it takes more to woo a highly coveted software engineer or marketing guru. Internet start-up Airbnb Inc., which offers a social marketplace for travel accommodations, for instance, lets its employees hold meetings in a tree house, complete with an upstairs napping area, called the Mushroom Dome. And there are two other themed "living rooms" that the company uses as conference rooms. Airbnb also has regularly scheduled perks, such as Mustache Mondays, Yoga Tuesdays and Thursday Recess. At Dropbox Inc., employees can rock out with guitars and drums in one room or challenge a co-worker to a game of Dance Dance Revolution in another. Last month, Peanut Labs Inc. and AdParlor Inc. sponsored a seafaring soiree called "Pirates of Silicon Valley Cruise".

These are just some of the perks that companies are offering to stay competitive. As The New York Times pointed out, these incentives have become a key tactic.

But the competition can be found worldwide, not just within Silicon Valley. According to Financial Times, at Logica, an IT services company in the Philippines, employees get fun rewards, such as Wii game consoles, white water rafting days and even a trip to Disneyland, for referring potential employees. One new hire at Skimlinks in London received a year's membership to the London Zoo.

"We found out that he really liked animals so we gave him a year's membership to the zoo as a gesture," explained Alicia Navarro, chief executive of Skimlinks.

Indeed, engineers and product developers are known for working late into the night, so balancing things out and keeping workers happy and motivated are essential.

"The message being sent is that this is a cool, cool place to work," said Jay Adelson, chief executive of SimpleGeo, to the The New York Times. "That matters when you are a young, hipster developer."