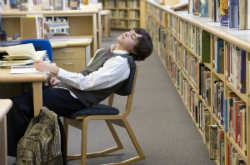 A recent study conducted at a private school in Rhode Island is adding to the growing body of evidence that delaying school start times can have a number of benefits for young adults.

The study illustrates that teens and young adults have special sleep needs. The Wall Street Journal reports that young adults need slightly more than nine hours of sleep a night. However, Judith Owens, the study's lead author and director of the Pediatric Sleep Disorder Center at Hasbro Children's Hospital, explains that biological changes cause a shift in young adults' sleep-wake cycles. In addition to these natural changes, homework, extracurricular activities, work and social time can push bedtimes even later. "On a practical level, this means that the average adolescent has difficulty falling asleep before 11 p.m.," says Owens.

According to Bloomberg Businessweek, Owens was approached by St. George's School, a private co-ed boarding school in Rhode Island, to conduct a study on a later school start time. The school planned to shift its start time from 8 a.m. to 8:30 a.m. School faculty worried that the half hour difference would only disrupt academic and athletic schedules, but agreed to give it a try.

About 200 ninth through twelfth grade students participated in Owen's study. Each student filled out questionnaires on sleep habits before and after the school's time shift. Researchers also collected data on tardiness and absences, as well as visits to the school's health center.

On average, students slept 45 minutes longer. 54.7 percent of students reported getting at least eight hours of sleep; an increase from 16.4 percent before the time shift. Students also reported going to bed about 15 minutes earlier.

There were also significant changes in mood as the percentage of students who said they felt depressed or "at least somewhat unhappy" decreased from 66 percent to 45 percent. They also felt less annoyed or irritated throughout the day (63 percent down from 84 percent). Lastly, the number of students who missed or were late to their first class decreased by almost 50 percent.

Although the results seem promising, Live Science reports that more research needs to be done. It is unclear whether or not these dramatic improvements would last as the study was only conducted over a span of two months. Owens also did not have a control group so researchers do not know if the benefits were due to the time change or other factors. Additionally, because roughly 80 percent of St. George's student body boards there, researchers feel the results may not translate to the general population. More research needs to be done before high schools across the country implement new start times.

Nonetheless, many still feel it is something to think about. "I think the evidence really is mounting that it's an undertaking that's well worth at least considering," says Owens in Live Science.