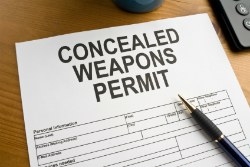 In addition to books, students at University of Colorado campuses can now carry concealed weapons to school after the state supreme court overruled the public institution's ban on guns on Monday.

"We're very, very happy," James Manley, of the Mountain State Legal Fund, told The Denver Post. "The position of the Supreme Court was that they (the CU regents) were operating above the law."

The issue came to light after three El Paso, Colorado students filed a lawsuit in 2009 saying that the school's gun ban violated of the state's Concealed Carry Act, which the state legislature passed in 2003. That 2003 law made permissive the carrying of concealed weapons in all areas of the state except for K-12 public school buildings and other public institutions having security checkpoints, reported The Chronicle of Higher Education. It also prohibited local government from enacting any resolution conflicting with the Concealed Carry Act.

However, the school's gun ban has a long history, being adopted in 1994 by the school's board of regents, according to Reuters. Initially, the students' suit was thrown out by a district judge who declared that the school board of regents was not acting as a "local government," but on its own "statewide authority," according to The Denver Post. However, the state's court of appeals declared the concealed carry act had application statewide. Monday's decision by the state's supreme court upheld the lower court's reversal. The court also indicated that had the state legislature meant for the university's board of regents to act as a separate body such a provision could have been included in the legislation.

Other school policies related to the carrying of weapons on campus still stand. This prohibition continues to remain for explosives, firearms, and additional dangerous and illegal weapons, according to The Chronicle. The only change is for concealed weapons.

Not all stand in support of the state's supreme court decision. This includes Bruce D. Benson, the university's president.

"We are disappointed the Colorado Supreme Court determined that the Board of Regents does not, in this instance, have the constitutional and statutory authority to determine what policies will best promote the health and welfare of the university's students, faculty, staff and visitors, whose safety is our top priority," he said in a press release.