In State of the Union, President Obama Talks Income Inequality and Equal Pay 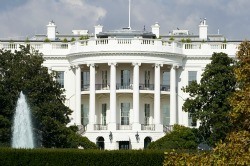 On Tuesday, President Obama gave his sixth State of the Union Address, during which he expressed his goal to make 2014 "a breakthrough year for America," according to The New York Times transcript. Equal pay, minimum wage, and jobs were all major topics discussed -- and according to The Wall Street Journal, they were also three of the six topics that saw the largest spikes on Facebook when analyzing posts that used the #SOTU hashtag.

During his speech, Obama stressed workplace equality for women. As noted in The Daily Beast, the President lamented the fact that even though women comprise about half of the American workforce, they still earn 77 cents for every dollar a man earns. He criticized that fact as "wrong" and "an embarrassment," especially in this day and age. "A woman deserves equal pay for equal work," he asserted, "She deserves to have a baby without sacrificing her job. A mother deserves a day off to care for a sick child or sick parent without running into hardship -- and you know what, a father does, too. It's time to do away with workplace policies that belong in a Mad Men episode." He called on corporations, Congress, and the White House to "come together…to give every woman the opportunity she deserves. Because I firmly believe when women succeed, America succeeds." He further condemned unpaid sick days and supported maternal and paternal leave policies that would help reduce gender inequality in both the workplace and the workforce. When discussing wages for low-income earners, he indicated that over half of these workers are women, particularly minority and immigrant women. He also stated, however, that despite the fact that "women hold a majority of lower-wage jobs…they're not the only ones stifled by stagnant wages."

Representative George Miller (D-CA) explained in the San Francisco Chronicle how poor wages are affecting more than just low-skilled workers: "Families have members with a college education who are working at the minimum wage. People who are making $15 an hour or $20, making $30 an hour, are saying, 'Jesus, I can't make ends meet on what I'm making. How do you do this if you're on the minimum wage?'"

As reported by The New York Times, Obama addressed the large wage gap between the wealthiest earners and the rest of America, stating that while top-earners "have never done better," average wages have remained relatively stagnant. "Inequality has deepened," he said, and "[u]pward mobility has stalled." "The cold, hard fact is that even in the midst of recovery, too many Americans are working more than ever just to get by, let alone to get ahead. And too many still aren't working at all. So our job is to reverse these trends."

In an effort to bridge the class wage gap, Obama urged Congress to "[g]ive America a raise" and proposed a national minimum wage increase from $7.25 to $10.10/hour. He also announced an executive order that would raise the minimum wage for future federal contract works to $10.10/hour and further proposed an expansion of the earned-income tax credit for low-wage workers without children.

Moving on to retirement, Obama revealed plans for "MyRA," a new savings bond for workers without access to traditional retirement plans, as shown in the transcript. "And if this Congress wants to help, work with me to fix an upside-down tax code that gives big tax breaks to help the wealthy save, but does little or nothing for middle-class Americans, offer every American access to an automatic IRA on the job, so they can save at work just like everybody in this chamber can."

Alluding to partisan battles he's had with Congressional Republicans, the President said that while he is "eager" to work with Congress, "America does not stand still -- and neither will I. So wherever and whenever I can take steps without legislation to expand opportunity for more American families, that's what I'm going to do." However, The Daily Beast pointed out that while executive orders may work sometimes, most of the President's agenda items will in fact mandate Congressional legislation.