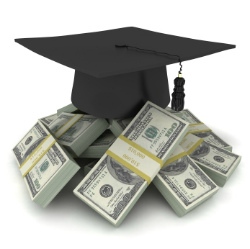 This year's annual ranking of most expensive colleges compiled by Campus Grotto underscores just how dramatically the cost of higher education has risen in the past few years: While in 2007 the total annual cost of attending only one institution, George Washington University, topped $50,000, today 111 schools share that dubious distinction. Moreover, a total of 19 institutions charge over $55,000 per year for tuition, fees, room and board.

Topping Campus Grotto's list for the fourth year in a row was Sarah Lawrence College, with a total annual cost of $59,170. New York University, Columbia University and Harvey Mudd College followed, with Eugene Lang College (The New School) taking fifth place at $55,890. As pointed out by The Washington Post, four out of the five most expensive schools are located in New York, where pricey housing costs likely contribute significantly to the sticker price.

Campus Grotto noted that the prices listed vary greatly from the actual price that most students pay. For example, according to the Department of Education's College Navigator Website, the average full-time student who received financial aid at Sarah Lawrence College paid $26,112 in 2009-10. Meanwhile, the college's sticker price for tuition, fees, room and board for that year was $56,738.

By the end of this month, all institutions will be required by federal law to include a net price calculator on their websites in order to give applicants a better idea of the actual cost of colleges. In the coming weeks, Campus Grotto expects to release a new list of most expensive colleges based on net price, rather than sticker price.

Forbes also released its own list of America's most expensive colleges this week, based on slightly different data than Campus Grotto. The list was compiled with information from the Washington, DC-based nonprofit Center for College Affordability & Productivity, which also took into account the cost of books, transportation, and mandatory computers.

Like Campus Grotto, Forbes ranked Sarah Lawrence College as the most expensive college of all, with a total cost of $58,334 per year. The next four institutions listed in order were the University of Chicago, The New School, Washington University in St. Louis, and Columbia University.

Forbes attributed the high price of Sarah Lawrence to salaries and wages of faculty, which greatly impact tuition costs since there are only 2,500 students in the institution. "In practically all cases, our classes are seminars with an average head count of 12 students," noted Thomas Blum, vice president for administration, who was quoted by Forbes. "We have five lecture sections this fall, and our largest lecture section may have 75 students."