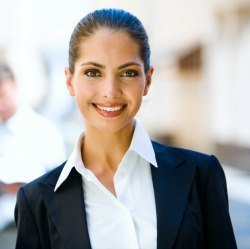 In this digital age, Americans are inundated with stock images -- the photos that often accompany articles and advertisements -- and the stories they tell. Facebook executive Sheryl Sandberg, author of the book "Lean In: Women, Work and the Will to Lead," believes that often, those photos reinforce outdated gender stereotypes, The New York Times stated. With the help of Getty Images, she hopes to change that.

Last week, Sandberg's nonprofit organization, LeanIn.org, announced a new partnership with Getty Images, one of the world's largest providers of stock photography. The goal: To offer a special collection of stock images that undermine gender stereotypes often perpetuated by the medium. Instead of offering photos of moms serving their kids breakfast, the collection will feature women surgeons and hunters, girls riding skateboards and men changing diapers.

"When we see images of women and girls and men, they often fall into the stereotypes that we're trying to overcome," Sandberg told The New York Times. "and you can't be what you can't see."

Sandberg and company hope the new photo collection will help represent women and family life in a more empowering way, it could have a wide reach: Among Getty's 2.4 million customers and library of more than 150 million images, "women" is the most commonly searched term in the library, followed by "business," reported Mashable. "Family" also cracks the top 10.

Stock photos have a reputation for sexism, reports The Wire. For instance, Edith Zimmerman at The Hairpin once created a compilation of them entitled "Women Laughing Alone with Salad." The Cut also created a compilation of "feminist" images featuring big-breasted women in boxing gloves or carrying power tools. Some experts say gender bias in stock photography is damaging for both men and women, and that by changing this imagery, the new project could whittle away at these stereotypes.

"One of the quickest ways to make people think differently about something is to change the visuals around it," Cindy Gallop, who started the United States branch of advertising agency Bartle Bogle Hegarty, told The New York Times. "The thing about these images is they work on an unconscious level to reinforce what people think people should be like."

Pam Grossman, director of visual trends at Getty, told Mashable that though sexist imagery persists, the portrayal of women in stock photography has slowly shifted in the right direction over the last few years. In 2007, the top selling Getty image of a female was a naked women lying in bed, covered only by a sheet; today it is a photo of a woman riding a train. Grossman said the latter image really paints the woman as "the protagonist of her own story."

"We're really trying to visualize a new world," Grossman told Mashable. "I know that sounds very grand, but it's absolutely true. This is a real passion project for us."

The new gallery launched just ahead of Women's History Month and LeanIn.org's first anniversary, both of which are in March. The New York Times reports that the project comes amid a renewed national conversation about women in the workplace, driven in part by the success of Sandberg's book and a potential Hillary Rodham Clinton presidential run.