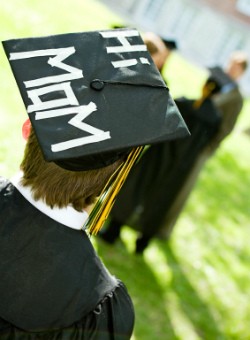 Faced with a high unemployment rate, a mountain of debt and a competitive job market, many 2011 college graduates will be returning to the nest after receiving their diploma.

The New York Post reported that a survey conducted by consultant firm Twentysomething Inc. showed that 85 percent of this year's graduating class will be moving back home; that's up from 67 percent in 2006. While moving back in with mom and dad is not ideal, many grads simply have no other choice.

Despite the fact that companies are beginning to hire, many young people are still having trouble finding a job. As the New York Post pointed out, young adults are extremely frustrated with the job hunt.

"I've applied for between five and 10 jobs a day, and have had a bunch of interviews that have gone really well," said Madison Grieco, a straight-A student who earned her bachelor's degree from Berklee College of Music and took business classes at Columbia and Harvard. "Each time they say the same thing--we've got no jobs, hopefully we can call you in a few months."

Rick Raymond, vice president of marketing at College Parents of American, an advocacy and support group for college parents, said that one problem is that companies are not looking to hire new grads.

"It's brutal for the average undergraduate. Graduates are not the first to be hired when the jobs markets begins to improve," he said.

As a result, FOX Business reported that the unemployment rate among young adults is at 15.7 percent.

Many college graduates also have high student loan debt, which makes it even harder to avoid moving in with the parents. As The New York Times reported, student loan debt now outpaces credit card debt and is likely to continue growing as the cost of education increases and cash-strapped states cut back on the money they give to colleges. In 2008, two-thirds of four-year degree recipients graduated with debt. Last year, grads who took out loans for school left college with an average of $24,000 in debt.

While moving back home is less-than-desirable, it can help new grads cut expenses and begin to pay off their debts. Therefore, FOX Business listed a few things to make the transition back home a little more bearable.

Dr. Gregory Jantz, psychologist and author of How to De-Stress Your Life recommended that parents and children agree to a set of rules and expectations, including setting a realistic time for the new grad to move out. Students should also help out around the house, whether it is chipping in to help pay for the mortgage or rent, picking up groceries or cleaning.

It is also important for unemployed grads to actively look for jobs and show parents that they are planning their futures. After all, parents want to know that the money they spent on your education was not a waste.

Lastly, Suzanna de Baca, vice president of wealth strategies at Ameriprise Financial, pointed out that parents also need to do their part. While it is natural to want to be compassionate and help your child during this difficult transition, parents should not let the situation change their life plans or retirement goals.

"Part of the responsibility of the parent is to help the child become independent," said de Baca.

"The Rules for Moving Back Home With Mom and Dad," foxbusiness.com, May 16, 2011, Emily Driscoll