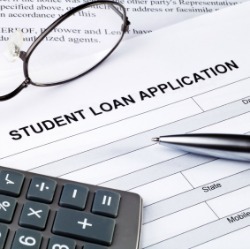 In a speech Friday to college students, President Obama launched a campaign to stop student loan rates from increasing on July 1 under current law. Without government intervention, the rates for new subsidized Stafford loans will double from 3.4 percent to 6.8 percent, Take Part reported. About 7.4 million students nationwide have this type of loan.

"That means that the average student with those loans will rack up an additional $1,000 in debt," Obama said at the event in the White House Rose Garden. "That's like a $1,000 tax hike."

Senate Democrats plan to vote to extend the current rate for two more years whereas House Republicans last week approved a bill for a variable rate on the loans, one that reflects current markets, The New York Times noted.

Under the House's concept, the Stafford rate for undergraduate students would change annually based on the cost of a 10-year Treasury note plus 2.5 percent, with a maximum 8.5 percent rate. For PLUS loans, which help fund graduate education, the rate would be higher -- the Treasury note plus 4.5 percent, with a 10.5 percent cap. The Congressional Budget Office estimated rates would be about 5 percent next year and about 7.7 percent in 2018.

Obama's plan, proposed in his budget request for the 2014 fiscal year, calls for a variable rate at the time the loan is made, but that rate would remain fixed for the term of the loan.

According to Inside Higher Ed, Obama didn't outline specifics in his Friday speech. He neither asked students to support his plan nor did he support the Democrats' push for extending the current 3.4 percent rate for one or two more years. He did, however, criticize the Republicans' recent bill for variable, unfixed loan rates.

"I'm glad the House is paying attention to it, but they didn't do it in the right way," Obama said. "It fails to lock in low rates for students next year. That's not smart. It eliminates safeguards for lower-income families. That's not fair."

"We recognize that a short-term fix may ultimately be necessary to prevent interest rates from increasing for subsidized student-loan borrowers," David A. Bergeron and Tobin Van Ostern said on the center's website as noted in Take Part. "This is far from ideal, however, and Congress should only consider a short-term fix if competing priorities interfere with the passage of high-quality, long-term legislation. It is also critical that any savings needed to pay for the short-term fix should come from sources other than the federal student aid system."

Next week, students will testify before Congress as part of CAP's campaign for student loan reform.

"Loans Back in the Spotlight," insidehighered.com, June 3, 2013, Libby A. Nelson

"With Students as Backdrop, Obama Warns of Doubling of Loan Rates," nytimes.com, May 31, 2013, Sarah Wheaton