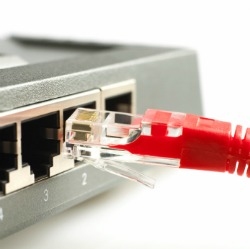 College students of today depend heavily on the Internet for just about everything. So, it is no surprise that one Cornell University student is fed up with the institution's Internet bandwidth policy, which charges students who exceed a monthly cap.

Cristina A. Lara, a sophomore at Cornell, started a petition last week to end the university's Network Usage-Based Billing model, reported The Chronicle of Higher Education. Lara called the policy "ridiculous" and hopes to garner the support of at least half of Cornell's 13,000 undergraduate students.

In the petition, Lara argued that the rising cost of education makes it difficult for students to pay an extra cost for high speed Internet.

"With a pricetag $57,000 per year, Cornell University should give it's(sic) students unlimited Internet usage," Lara said.

Lara told Inside Higher Ed that she was charged hundreds of dollars in excess network-usage charges--including one month that cost her $150. Her love for streaming videos on Netflix and Hulu as well as video chats on Skype were the culprit. Lara also noted that Internet access is crucial to Cornell students' social lives since there are not many "nightlife" options in the suburban area.

While high speed Internet is necessary for students to keep up with curriculum, some question whether Internet use to stream rich media, such as movies on Netflix, is a right or a luxury. Experts believe that the petition does not stand a chance. According to The Chronicle of Higher Education, Gregory A. Jackson, vice president of Educause, stated that universities need to decide whether the demands are important to their educational mission. Furthermore, Tracy Mitrano, Cornell's director of information-technology policy, noted that few students ever hit the cap and the chances of that happening are even more unlikely now that the university has raised the cap from 20 to 50 gigabytes. She also pointed out that Cornell's policy is more transparent than other universities' methods. At Cornell, if a student is approaching the monthly limit, he or she will be notified. At most other universities, however, network administrators simply slow down the connections of bandwidth hogs.

According to Inside Higher Ed, the university has accommodated students' demands thus far by raising the cap exponentially--when the policy was implemented in 2003, the threshold was just two gigabytes per month. As of Monday evening, 240 students had signed the petition.