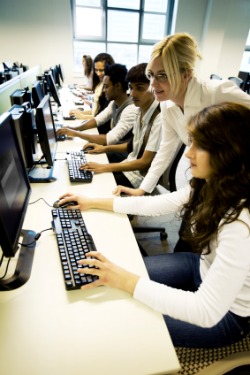 A new report released by a nonprofit group has found that although low-income, Latino and immigrant parents believe that sending their children to college is important, they are often unaware of available financial aid opportunities.

The study, "Cracking the Student Aid Code: Parent and Student Perspectives on Paying for College," pooled information from focus groups, interviews and surveys of more than 2,000 parents and college students. The report, released by the College Board, focused primarily on input from low-income families, nontraditional students and advocates for members of immigrant groups. After analyzing the data, researchers discovered that participants overwhelmingly understand the importance of college, but frequently misunderstand the college financing process, which then becomes a significant barrier that is difficult to overcome for many students and families.

According to Inside Higher Ed, more than 75 percent of parents and 85 percent of college students agreed that financial aid should be a top priority for the federal government. And yet, the study found that nearly half of parents surveyed did not know the cost of attending a public college in their home state. Furthermore, only 44 percent of Latino parents knew about the Pell Grant program, the federal government's primary need-based assistance grant for low-income students.

Notably, the authors of the study found that the current financial aid system fails to accommodate immigrant families, who find it difficult to navigate complicated application processes.

"Much about the current financial aid application process presumes understanding of and comfort with American culture," the study said. "Those interviewed expressed the view that sensitivity to the needs of immigrant Americans is missing from the process."

In response to parent beliefs that college is unaffordable and applying for aid is time-consuming, the study offers families new ways of approaching paying for their children's higher education, The Chronicle of Higher Education reported. The most popular proposal was to have the government send tax filers information each year on how much their children would qualify for in Pell Grants if they were currently enrolled in college, as well as cost information for public schools in their state and information on other types of financial aid. Some 90 percent of surveyed parents, and an even higher percentage of students, were "very" or "somewhat" supportive of the proposal.

"We think it's a good opportunity to reinvigorate the discussion about some of our proposals," said Kathleen Little, senior adviser for student-aid policy for the College Board and an author of the study.