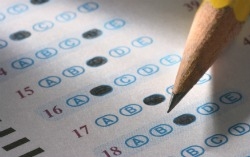 Six students have been charged with misdemeanors and a seventh faces more serious felony charges after an alleged SAT-cheating ring was uncovered by officials recently in Great Neck North, N.Y., according to The New York Times.

A 19-year-old student, Samuel Eshaghoff, was arrested Tuesday for allegedly receiving money from former and current students attending Great Neck North High School on Long Island and using fake IDs to take their SATs. Eshaghoff is a student at Emory University in Atlanta and reportedly flew home to take the tests after being paid anywhere from $1,500 to $2,500, reported The Christian Science Monitor. Eshaghoff was a 2010 graduate of Great Neck North High School.

Of course, the crux of the SAT ring is that the test taker needed to bring home high scores--this apparently was not a problem. The Christian Science Monitor reported that Eshaghoff allegedly scored between 2140 and 2220 on each of the SAT tests. The maximum test score on the SAT is 2400.

The Great Neck area is considered a wealthy community, according to The Christian Science Monitor, and that an alleged SAT-cheating ring occurred there, points to the pressure to succeed.

Robert Schaeffer, spokesman for the National Center for Fair and Open Testing, located in Boston, explained to The Christian Science Monitor that the issue is an "illustration of the SAT arms race that takes place, particularly in very affluent towns where kids think they are failures unless the go to a school where their parents would be proud to put the bumper sticker in their back window."

The alleged ring was uncovered after faculty heard rumors at the school about students paying someone to take the SAT. School officials made a list of students who took the test outside of the school district and compared resultant SAT scores with GPAs, noted The New York Times. The analysis revealed six students with grades in the low to mid Bs, but SAT scores in the 97th percentile. The Educational Testing Service, which administers the test, ran a handwriting analysis on these tests and determined that one student had taken them all.

"I do believe it's more systemic than just Great Neck North," Kathleen Rice, Nassau County's D.A., is reported as saying to The New York Times.

However, according to Tom Wing, a spokesman for ETS, high schools and colleges are not alerted when a student is suspected of cheating. This is due to confidentiality laws that are in place to protect minors. However, scores can be withdrawn when misbehavior is suspected.

Eshaghoff faces up to four years in prison related to charges of criminal impersonation, falsifying business records and scheming to defraud, according to The Washington Post. He posted $500 bail and pleaded not guilty. The other students were released without needing to post any bail. Four of the students are reportedly now in college while the other two are still in high school.

It remains to be seen whether the schools that these students attend will take any action to discourage such alleged behavior.

"The real question is, as a society do we really want to take this seriously or only deal with it when people are unlucky enough to get caught," Michael Josephson, founder and president of the Josephson Institute for Ethics, said in The Christian Science Monitor. "We're raising the next generation of corporate villains and pirates if we don't reinforce with vigor and consistency the absolute essentiality of integrity."