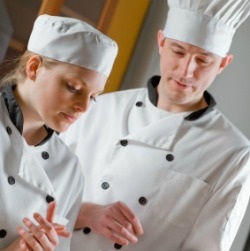 The number of people pursuing culinary careers has increased dramatically in recent years. According to The Sacramento Bee, the Culinary Institute of America (CIA) found that enrollment in culinary schools has almost doubled since 2010, and the number of Americans working in the restaurant industry has risen by 13 percent over the past decade. These increases are attributed to the increased media coverage of restaurant careers, as shows like "Iron Chef" and celebrities such as Giada De Laurentis encourage people to make their passion for food into a career. However, this steady increase in the popularity of culinary schools has led some students to protest what they believe to be declining standards at the Culinary Institute of America.

Last week, approximately 90 Culinary Institute of America students walked out of their classes to protest the institute's revised admissions standards, wrote The New York Times. In the 1990s, the institute required applicants to have professional kitchen experience in order to gain admission. However, in 2011, the CIA changed its professional experience requirement to include "front of house" experience, such as an applicant's work as a waitress, busboy, or someone in food retailing. This admissions revision, in conjunction with the school's purportedly relaxed dress code and rapid expansion in enrollment and campus locations, constitute what the protesting students assert is a decline in the quality of a CIA credential.

"Our core mission is to protect the reputation of the institution and the value of the diploma," declared Zac Hoffman, the protest's leader and a student owing $87,500 to the institute. Hoffman argues that the new admissions standards are "dragging everyone down. […] Somebody who worked in a jam shop on the Upper East Side for a few months isn't starting out in the same place."

CIA graduate Alex Tyree (class of 2005) agreed with the protesting students, telling the New York Times, "These chef-bots roll up right out of the school with a few skills and no work ethic. […] It's becoming a chef factory more than a culinary school."

In response to these criticisms, CIA provost Mark Erickson stated, "This is a profession and an institution in transition," and added that current developments in the culinary industry encourage "creativity and improvisation." These developments are at odds with what Erickson describes as the traditional, "autocratic master-apprentice model, where all the students say is, 'Oui,chef.'" According to the Poughkeepsie Journal, CIA spokesman Stephan Hengst wrote that the CIA is currently the only culinary academy nationwide that even has a work experience requirement. "We recognize (front-of-house) experience also gives students the desired exposure to the industry, and many CIA graduates today pursue careers in restaurant management outside the kitchen," he said.

While the ultimate result of this student protest remains to be seen, it highlights the difficulty that academic institutions face when trying to balance the accessibility of their programs with the value of the credentials they provide.