Students Need To Learn How To Not Plagiarize 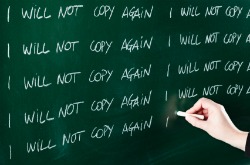 A recent study from anti-plagiarism company Turnitin revealed that nearly 11 percent of college students committing plagiarism turned to Wikipedia for a source.

In fact, Wikipedia, Yahoo Answers, Slideshare and Answers.com were the top four sites used by plagiarizing college students, according to a press release. Wikipedia, however, outscored the other three sites by seven percent or more. The results of the study were released November 3.

"We hope that sharing this data will help educators initiate discussions with students regarding plagiarism and student writing," Chris Harrick, vice president of marketing at Turnitin, was quoted as saying in the press release. "Solutions like Turnitin can reduce unoriginal content by 50 to 75 percent for secondary and higher education schools while teaching students how to research, cite, and write correctly."

The study is important because 55 percent of college presidents in a Pew Center survey indicated they were concerned that plagiarism was increasing, noted Turnitin.

The Turnitin study looked at some 33 million-plus papers submitted between June 2010 and June 2011. Some 128 million content matches were found between these submitted papers and Turnitin's indexed crawl of Internet sites.

According to The Chronicle of Higher Education, some 2,500 colleges use Turnitin to assess whether materials are plagiarized. Other programs are also in use to detect plagiarism. Some include a program called TinEye that checks plagiarism in design and photo materials as well as WriteCheck, which lets students check their own papers for plagiarism before submitting.

However, professors fastidiously checking papers for plagiarism can create an air of distrust.

"When (plagiarism-catching programs are) used as a default, they also set up a default climate of suspicion in the classroom," Rebbecca Moore Howard, a Syracuse University professor of writing and rhetoric, told The Chronicle of Higher Education.

The perils of investigating plagiarism through programs such as Turnitin can be devastating. Panagiotis Ipeirotis, instructor of an introductory information technology class at New York University's Stern School of Business, found this out.

After he investigated plagiarism in his class, more than 20 of the 108 student students admitted to cheating by the end of the semester, according to The Chronicle of Higher Education. However, the "investigation" also had negative results. Students became anxious, time was taken away from instruction and classes sometimes became uncomfortable. The instructor also received lower course evaluations at the end of the semester.

One strategy to avoid such results is to allow students to check papers on Turnitin or similar programs before submitting their materials. That's what Paulette Swartzfager, a freshman writing teacher at the Rochester Institute of Technology has done.

"What happened as a result of this has just been wonderful," Swartzfager said in The Chronicle of Higher Education. "They use it as a tool. They keep resubmitting it and working on it until it gets appropriately in their own words, or in quotes, or cited."

Others, however, argue that professors need to focus more on helping students understand their research when teaching how to write.

"How much plagiarism goes away if students actually know how to read and write from sources?" questioned Howard. "My guess is: a lot."