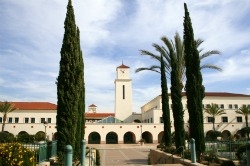 As reported by the Los Angeles Times, CSU board of trustees voted 13 to 2 in favor of a 12 percent increase in tuition for the upcoming fall semester, bringing undergraduate tuition to $5,472. The increase was in response to a $650 million cut in state funding and is on top of a previously approved tuition increase for the coming academic year.

SF Gate reported that trustees said the hike was needed to maintain student access and quality of programs and services. Because of the cut in state funding, CSU chief financial officer Ben Quillian encouraged trustees to support the tuition boost, saying that without it Cal State would have to deny access to 40,000 students or completely shutdown many of the smaller campuses. Another option would have been to cut 2,300 jobs.

Students opposed the hike. According to the Contra Costa Times, recent increases in tuition will force students to pay roughly 26 percent more than they did last year, which has put college out of reach for many.

"We are truly disappointed in your actions to make CSU less affordable," said Cal State Long Beach student Dalia Hernandez to trustees during their meeting on Tuesday. "Your solution does not allow us to seek a better future."

Indeed, Shellsea Stoughton, a senior at California Maritime Academy, told the Times-Herald that she knows many people who can no longer afford to return to school.

"In these economic times, it's too expensive to go to school," Stoughton said.

According to the Los Angeles, the tuition increase came as the board also approved a $400,000 compensation package for the new San Diego State University President Elliot Hirshman, which further outraged students as well as Governor Jerry Brown. Hirshman's pay is $100,000 more than his predecessor's compensation.

"At a time when the state is closing its courts, laying off public school teachers and shutting down senior centers, it is not right to be raising the salaries of leaders who--of necessity--must demand sacrifice from everyone else," wrote Brown in a letter to board chairman Herbert Carter.

Bloomberg reported that Hirshman's salary was approved 12-3 by the board who argued that CSU presidents are significantly underpaid for running such complex organizations.

According to The San Diego Union-Tribune, Hirshman, whose first day was July 5, is now the highest paid president in the 23-campus system.

Cal State L.A. graduate student Erik Dimitruk told the Los Angeles Times that the board does not seem to understand what students need.

"How are you paying someone $100,000 more a year and saying we have to raise tuition--it doesn't make sense," said Dimitruk. "I understand with the budget cuts that people have to tighten their belts, but everyone should have to do that."