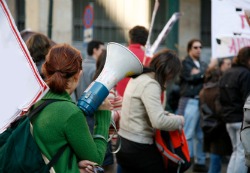 University students in Las Vegas staged the largest student protest in the state's history over proposed cuts to higher education that could include laying off tenured faculty and declaring the equivalent of bankruptcy for the school.

About 1,000 students flocked to the Capitol and Legislative Building to rally against a proposed $160 million cut to higher education proposed by Gov. Brian Sandoval.

The protestors brought more than signs -- they have a plan for sustaining the current budget. "The students want to continue the $700 million to $800 million temporary tax increases approved in 2009 that will expire June 30," reports the Las Vegas Review-Journal..

But will the demonstration have any impact on the decision makers in charge of the state budget?

One cynic says it's not likely because students lack the clout and political prestige to sway politicians. "This doesn't get them their outcome...To have clout isn't to be noisy -- it's to make people uncomfortable about their political future," Guy Rocha, a state historian and supporter of the rally against cuts, told The Las Vegas Sun.

For now it appears Rocha may be right about the outcome in Nevada as Gov. Sandoval has said he is not going to approve the student protestors' plan for shoring up the state coffers, citing a campaign pledge to discontinue the temporary taxes.

Gov. Sandoval told students, "Raising taxes on business now would be very detrimental to our economy," according to the Las Vegas Review-Journal report.

The scene playing out in Las Vegas mirrors a nationwide trend: higher education as a target for making up shortfalls for cash-strapped states.

Almost 50 states have cut higher education since the start of the recession and with few options left, many are now considering implementing austerity measures that could include closing campuses, laying off tenured professors and limiting student enrollment, according to MSNBC.

California, Florida, Pennsylvania, Arizona and Illinois are other states that are facing especially tough budget decisions in coming months as most of the alloted federal stimulus money is slated to run out by the end of the fiscal year and tax revenues are declining.