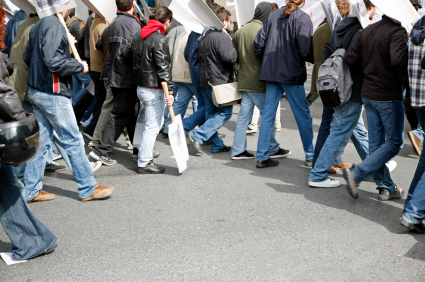 Students in public universities throughout the country are planning to protest budget cuts, layoffs and steep tuition hikes today.

USA Today reports that college students on more than 100 campuses in at least 32 states expect to participate in what is being called a Day of Action to Defend Public Education. The protests originated in California, where devastating budget cuts have resulted in significant tuition hikes and limited classes.

"There are student activists all over the country who are looking to California as something to emulate," explained Doug Singsen, a graduate student at the City University of New York who was quoted in The Washington Post. "We want this to be the beginning of a movement that gets stronger."

At the University of Maryland in College Park, students will be walking out of classes at noon, meeting in the student union and marching to an academic building. The Post notes that Bob Hayes, an organizer of Maryland's protest, said that students are angry that their tuition dollars are being designated for development projects and administration salaries instead of better instruction.

"We feel disconnected from our education," Hayes was quoted as saying in the Post. "We're being run by a Fortune 500 company instead of by a university."

But tension is expected to be highest in California, where some have cautioned against having the protests escalate into violence as they recently have: Last week at the University of California, Berkeley, police were called in to quell rioting crowds who broke windows and started fires. Earlier this week, five Sacramento students were arrested for refusing to leave a state assemblyman's office because he would not promise to increase financial support. And yesterday, students broke into the Humanities building at California State University, Fullerton, where they remained for several hours.

"We understand the frustration," noted an editorial in the Contra Costa Times, "but violence is not the answer. . . . We must save our schools, not destroy them."