Students Say They Feel Guilty When Texting In Class 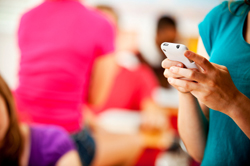 With texting and social media now the preferred method of communication, many college students find it difficult to resist texting while in class.

According to The Chronicle of Higher Education, a survey of students at the University of New Hampshire, found that although students felt guilty about sending text messages while in class, a majority of them continued to do so anyway--80 percent of students reported that they send at least one text message in each of their classes.

The survey was conducted by student researchers at the UNH Whittemore School of Business and Economics for a marketing research class, noted a press release. A total of 1,043 students from all colleges at UNH were interviewed.

When asked about the data, Gretchen Eastman, one of the lead student researchers said, "I wasn't surprised by the results, but I was surprised to see that some teachers didn't prohibit texting in their classes."

According to Collegio, Pittsburg State University's student newspaper, Gil Cooper, who has been a communications professor at the school since 1992, argued that texting in class is impolite.

"When a phone goes off, people check and start texting back," he said. "I'm thinking if I did that while someone was talking to me, it would be considered rude." Cooper told Collegio that he has different cell phone rules depending on the size of the class. With larger classes, he is stricter.

The UNH study also found that business students text messaged the most and women were more likely to text while in class than men, noted the press release. Data also showed that texting during class distracted students from course materials, reported The Chronicle of Higher Education. However, Collegio found that texting actually helped some students stay focused.

Ashley Albright, a junior at PSU, explained that texting helps her refocus when she gets bored or anxious.

"If I text, it helps clear my head for that moment and I can return back to the lecture with my full attention," she said.