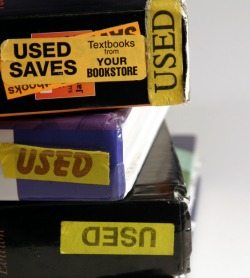 With the costs of college on the rise, many students are looking to save anywhere they can. Unfortunately, the savings are becoming harder to come by when it comes to purchasing textbooks for class. That's because, as Mercury News recently noted, the cost of college textbooks shot up 82 percent and nearly three times the rate of inflation from 2002 to 2012. According to a study released earlier this month, 65 percent of students surveyed reported that they had neglected to buy at least one book required for class. Among them, nearly 94 percent worried that their decision could impact their grades.

The growing cost for textbooks is just one of the many factors that students are now considering when plotting out their educational plans, notes the Huffington Post. In fact, the newly released survey indicated that almost half of respondents took the cost of books into account when deciding how many classes to sign up for. According to the College Board, college students are still spending about $1,200 per year on textbooks on average at traditional four-year public schools. And that's despite the fact that many students go out of their way to buy used.

"Despite the growth of used book programs, rental markets, and e-textbooks, student consumers are still captive to the high prices of the traditional market," Ethan Senack, the federal higher education associate for the U.S. PIRG Education Fund and author of the report, said in a statement.

Although students may be able to purchase textbooks second-hand or borrow from friends, many believe that they are being set up to fail. Among them are Carole Moore, who recently wrote about college textbook schemes in the JD News out of Jacksonville, North Carolina. According to Carole, book publishers are gaming the system to the detriment of student's finances.

"The publishers prolong the life of their material by taking the same manuscript year after year, making minor changes and switching things around so the exact same material appears on different pages, thus compelling students to spend hundreds buying "new" versions to take their classes," wrote Carole.

She also explained how book publishers have added online-only materials that need a special code for students to gain access. According to Moore, textbook publishers have also begun creating textbooks that are school-specific, likely in an effort to limit their resale value.

Some states, including California, have introduced legislation that would provide online access to certain textbooks for college students in their state. In California, Senate Bills 1052 and 1053 promise to allow students to access 50 popular college textbooks online starting next year.

Meanwhile, some schools are taking matters into their own hands by instituting policies that expand textbook access to students. For instance, San Jose State University runs a campaign aimed at encouraging professors to use open source textbooks, notes Mercury News. Also, Rice University in Texas reportedly saved 40,000 students $3.7 million dollars by allowing them to sign up for free, peer-reviewed materials.

As the issue plays out, students and college professors alike are worried how going without textbooks will impact student success.

"I think if you speak to any faculty member, they will tell you that students, for a variety of reasons, can't or don't purchase the traditional textbooks," Beth Smith, chairwoman of California's Intersegmental Committee of the Academic Senates, told Mercury News. "It has a devastating effect on their ability to keep up with the course."

"Majority Of Students Have Skipped Buying A College Textbook Because They're Too Expensive," The Huffington Post, January 27, 2014, Tyler Kingkade, http://www.huffingtonpost.com/2014/01/27/textbooks-prices_n_4675776.html