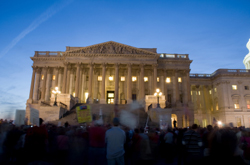 A crowd of students and other for-profit school supporters gathered on Capitol Hill on Wednesday to protest a federal proposal for stricter regulations on career schools.

According to Inside Higher Ed the sector's first-ever student rally was coordinated by the Association of Private Sector Colleges and Universities (APSCU). Organizers estimated that 1,500 to 2,500 people from 26 states--from as close as Maryland to as far as California--gathered to show their support for career education programs. Others estimated the crowd to be far smaller, but Inside Higher Ed pointed out that estimates are highly subjective as calculating how many people are standing on a patch of grass in Washington can be difficult.

Bloomberg reported that Education Secretary Arne Duncan postponed the "gainful employment" rule to early 2011 after receiving some 91,000 comments on the issue. According to Politics Daily, for-profit schools and many students oppose the rule, which would cut federal financial aid to colleges with high proportions of graduates who do not make enough money to pay back loans. Many argued that the proposal will eliminate programs that serve low-income and minority students, stated The Washington Post.

Students interviewed at the rally by Insider Higher Ed said although they did not know all the details of the policy debate, they were worried that they might lose access to financial aid or career training. Aryn Northrop, a student at Medix School, said she felt taking out loans was worth getting vocational training. She added that not all students "want to go to a regular college and it's not fair that we should lose opportunities to build careers." Marcus Stevenson, a student at All State, agreed: "I like my school, so I felt like I had to come here and represent what we stand for... When I came to school, I was looking forward to just learning a trade, versus going to school for a bunch of other things. Just trying to learn something so I could go out there and go to work."

Jon Nuss, who is studying to be an automotive technician at Lincoln Technical Institute, told Politics Daily, "I did have an option to go to a state college, but it was too expensive and this was closer to home."

Harris N. Miller APSCU's president told Inside Higher Ed that the rally showed students' passion for their schools and commitment to the mission of for-profit colleges, a side that is often overshadowed by the sector's less-favorable view. "These are people who really care--they had to go out of their way, they had to get someone to take care of their children, maybe take a day off work."