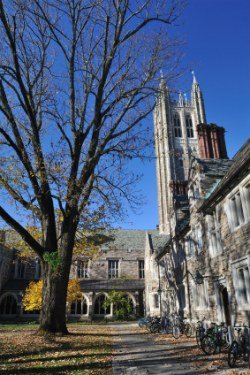 A suspected outbreak of the norovirus has occurred at two New Jersey universities, sending several students to the hospital.

Rider University issued a statement on its website, noting that while norovirus is usually not serious, it is highly contagious--according to the Centers for Disease Control, it can spread from the moment a person starts feeling sick to at least three days after recovery. Symptoms include diarrhea, vomiting, nausea and stomach pain. Less common symptoms include low-grade fever, chills, headache, muscle aches and fatigue. Most people recover in a day or two.

NJ.com reported that all sick students from Rider University are from different resident halls. Staff made visits to all dorms to find students in need of treatment. Some were sent to local hospitals, while others were treated on campus.

"They knocked on my door, they asked if I was feeling okay," said sophomore Matt Sheridan to NJ.com.

Freshman Carrie Lettiere said she first heard about the outbreak from Facebook posts. She later received a text message and email from school officials.

According to the university statement, officials are taking the outbreak very seriously. In addition to visiting each resident hall, the university's food and custodial services are taking all necessary precautions, including cleaning all residence hall bathrooms and other common areas.

The Daily Princetonian reported that the outbreak at Princeton University has been going on for the last two weeks. Approximately 90 students reported suffering from symptoms of gastroenteritis, which is caused by norovirus. Princeton's University Health Services and Office of Environmental Health and Safety have issued hygiene advisories and warnings to help prevent further contamination. The university has not issued such warnings since 2009 about H1N1 influenza and 2008 about gastroenteritis.

While the outbreak is unusual, Princeton University Spokesperson Martin Mbugua told The Daily Princetonian that the UHS was prepared.

"UHS plans for an increase in volume every February, since that is frequently a time when utilization of our services increases, so we have adequate resources to handle the number of students that we have been seeing," said Mbugua.

NJ.com reported that school officials do not know if there is a link between the two outbreaks. Nonetheless, Rider University officials have notified other area campuses as a preventative measure.