Studies Find That Telecommuting Is Not For Everyone 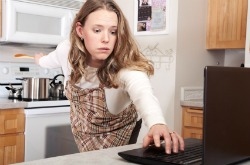 Despite the flexibility that telecommuting can offer, new studies have found that working at home is not necessarily the best option for all employees.

A new report published in the Journal of Business and Psychology has found that telecommuting can be especially stressful for employees who feel torn between their responsibilities at home and at work. That's because people in such situations often feel that there is no time for relaxation.

"A teleworker may feel conflict more because you're being constantly reminded of your home role: whether it's what you need to do as a parent or household chores," explained Timothy Golden, an associate professor of management at the Lally School of Management and Technology at Rensselaer Polytechnic Institute, who was quoted by Life Inc. "And that can make exhaustion worse."

Golden's study was based on a survey of 316 employees from a large computer company that allows telecommuting and flextime. He found that employees who felt conflicts between work and family showed increasing levels of exhaustion as their hours rose when working at home.

As FierceGovernment reported, the study noted that those who work from home extensively rarely get a break from everyday stresses such as bills and laundry. As a result, wrote Golden, teleworking "is apt to be draining on energy levels."

Golden pointed out that working from home can be extremely beneficial for the right people. "You save time commuting," he told Life Inc. "You don't have to deal with the stress of being delayed on your way to work because of traffic or weather. You have the comfort of working where you want to. But you have to think ahead of time about what might impact you if you're working from home."

A separate study by researchers at Stanford University found that telecommuting can also be beneficial for businesses. As Slate reported, the study described how productivity increased, as did hours worked, when customer service employees at a billion-dollar Chinese company were given the option to work from home: Home workers answered 15 percent more phone calls, took fewer breaks and sick days, and were nearly 50 percent less likely to decide to quit at the end of eight months.

Nevertheless, after the option was given to the entire company, only about one-half of the company's employees ultimately chose to work from home. The reason: Those who opted to commute to work found that they preferred the fixed work hours and the human interaction at the office over telecommuting.

"Telework is Harmful for Some Employees," fiercegovernment.com, November 14, 2011, Zach Rausnitz