Studies Show Many High School Graduates Are Unprepared For College 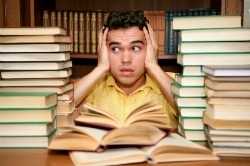 A number of new studies have found that a large percentage of high school graduates are not adequately prepared for college or career training.

A study written by researchers from Johns Hopkins University and the University of Arizona, titled "The Undeserved Third: How Our Educational Structures Populate an Educational Underclass," found that two-fifths of high school students graduate with few prospects for success in college or professional training. As reported by The Washington Post, the study found that one-third of high school students complete the modern college-preparatory track, and another one-quarter finish career-preparatory programs. The remaining 40 percent of students, whom the researchers refer to as "a virtual underclass of students," do neither.

Similarly, the Abilene Reporter-News in Texas reported that a recent study released by the Pearson Foundation and Harris Interactive found that more than half of community college students said they felt unprepared for college-level work.

College officials throughout the country are struggling with students' lack of preparedness. The Contra Costa Times reported that at California State University, for example, about 27,300 freshmen in the 2010 entering class of about 42,700 required remedial work in math, English or both. Those numbers are particularly concerning, given that the CSU system only admits freshmen who graduated in the top third of their high school class.

"It's a terrible indictment of the K through 12 system," said Jim Postma, a Cal State Chico chemistry professor, who was quoted by the Contra Costa Times. "If a factory was building cars and the lug nuts kept falling off the tires, you would do something pretty dramatic about it. We keep adding the lug nuts back to the tires rather than trying to figure out what the problem is."

At Texas' Cisco College, about a third of students typically need to take at least one remedial course. Amy Evans, a spokeswoman for the college, told the Reporter-News that in the current fall semester, 520 out of 1,674 new freshmen required developmental courses in math, English or both.

Cathy Ashby, who is the associate superintendent for curriculum and instruction with the Abilene Independent School District, noted that educators and parents must push high school students to enroll in challenging classes such as Advanced Placement courses.

"One mistake I hear often from parents is their desire to want their children to have 'an easy senior year,'" she told the Reporter-News. "This is a big mistake if we want our students to be prepared for college."

"More Than Half of Community College Students Say They are Unprepared," reporternews.com, November 21, 2011, Brian Bethel