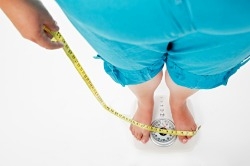 As much as we hate to admit it, slimmer people are more successful and earn more money over the course of their careers. However, a study that was published last year in the journal Social Forces and has recently garnered wider attention argued that a lack of education, not workplace discrimination, is to blame when it comes to overweight women having less success in the job market.

As reported in The New York Times, researchers examined data from a study that tracked more than 10,000 youth who graduated from Wisconsin high schools in 1957 from the start of their careers to retirement. They found that overweight men did not experience barriers when it came to getting hired and promoted. Overweight women, on the other hand, worked in jobs that required less education and as a result earned less than thinner women and men of all sizes.

This may not be too surprising as many studies have shown that employers are often biased against overweight workers. But researchers discovered that overweight women were less likely to obtain college degrees, regardless of talent, ambition or academic performance in high school. Specifically, overweight females, on average, completed 0.3 years less postsecondary education than slimmer females, reported The Sydney Morning Herald. And although discrimination may occur in the workplace, the researchers concluded that it was not a direct cause for lower socioeconomic status among overweight women.

"Bigger girls are less likely to go to college regardless of how well they did in school, their career aspirations or whether their parents went to college," explained Christy Glass, associate professor of sociology at Utah State University and one of the authors of the study. "That education deficit accumulates over the course of their careers."

Interestingly, reported The New York Times, there was no similar outcome among overweight men.

The New York Times reported that obesity prevention policies need to start early on and should be twofold--they need to promote healthy behaviors and shift attitudes by, for example, encouraging overweight girls to take college prep courses and extracurricular activities.

"The Skinny on Success: Body Mass, Gender and Occupational Standing Across the Life Course," ncbi.nlm.nih.gov, June 1, 2010