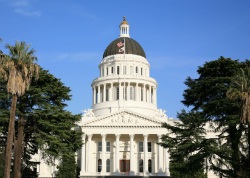 How important is it for a lawmaker to be college educated? A new report published by The Chronicle of Higher Education that provides insight on state legislators' educational attainment has many people asking this very question. According to the study published on Chronicle.com, approximately 25 percent of lawmakers do not have a bachelor's degree or higher. New Hampshire, New Mexico and Arkansas had the lowest percentage of college graduates (with an associate degree or higher), while California, Virginia and New York boasted the highest percentage of college grads.

The USA Today reports The Chronicle of Higher Education analyzed data from Project Vote Smart, a non-partisan research group that collects self-reported information from legislators' biographical surveys and campaign literature. Nearly 7,400 state legislators were evaluated. The Chronicle's editor, Jeffrey J Selingo, told The New York Times that his staff launched the project in response to complaints from college administrators who expressed concerns about decreases in state aid and scholarship money. College administrators worry state lawmakers who did not attend college may not understand the importance of higher education.

The results show, however, that while many are surprised to learn that a quarter of state lawmakers have limited higher education, their overall educational attainment is higher than the typical American. According to The Wall Street Journal, only 28 percent of US adults have at least a bachelor's degree. "Legislators aren't only supposed to represent the white-collar works of the world," said Adam Brown, a political scientist at Brigham Young University, "They need to represent everybody" as reported by The Chronicle of Higher Education.

Likewise, Kansas Representative Michael Peterson--who holds a law degree--said that despite years of legislative service, he could not tell you which fellow lawmakers held degrees and which ones did not. "In 22 years, I don't recall academic credentials ever once coming up," Peterson told The Wall Street Journal. "People are judged on their merit."

Still, voters tend to prefer candidates with higher education: the Congressional Research Service reports that 94 percent of congressional representatives hold at least a bachelor's degree, as has every US president since Harry Truman. "In New York, a college degree is an important rite of passage if you want to do public service," Russ Haven, legislative counsel for the New York Public Interest Research Group, told The New York Times. "You don't necessarily get wisdom and good judgment going to college, but it is helpful given the evolution of where the State Legislature is."

In addition to basic educational attainment, the report offers a glimpse into where state lawmakers typically attend school. According to the study, 80 percent of the evaluated legislators attended public institutions, and 55 percent attended schools within their home states. State legislators are also much less likely to be Ivy League graduates than their Federal counterparts: The New York Times reports that 1 out of every 189 state lawmakers went to Yale compared to 1 out of every 30 members of Congress. The report also evaluates how many legislators have actually studied law academically. According to the study, only 17.2 percent of lawmakers have a law degree. Texas, Florida and New York lead the pack among law school graduates while North Dakota, Delaware and New Hampshire fell to the back.