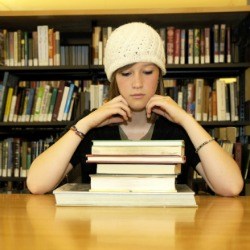 Choosing a college to apply to -- or enroll in -- can be a difficult task. Many undergraduate students may end up attending a school that they are either underqualified or overqualified for. A recent study, entitled "The Determinants of Mismatch Between Students and Colleges," examines this phenomenon and its reasons. For the study, researchers surveyed a cohort of students from the National Longitudinal Survey of Youth and found significant amounts of mismatch, where many high ability students chose to enroll in low quality colleges (a phenomenon called "undermatching") and low ability students enrolled at high quality colleges, called "overmatching".

According to Inside Higher Ed, researchers gauged students' academic preparation using factors such as test scores and grades. Each student was assigned a percentile. Colleges were given a similar percentile based on academic standing. Mismatching occurred when there was a 20 point divergence between the two percentiles. The Chronicle of Higher Education reported that approximately 28 percent of students in the sample were undermatched, while 25 percent were overmatched. Mismatching is nothing new, however, as these figures are similar to those three decades ago. Interestingly, in most cases, mismatch was a direct result of students' decisions rather than college admission decisions.

"Perhaps most surprisingly to us, student decisions drive mismatch in almost all cases. Most students who mismatch either do not apply to a well-matched school or apply and are admitted, but do not enroll," wrote Eleanor Wiske Dillon of Arizona State University and Jeffrey Andrew Smith of the University of Michigan, researchers and authors of the study, as quoted by Inside Higher Ed. "Typically students who are mismatched aren't getting rejected by appropriate colleges: they are either not applying, or are getting in and opting not to enroll."

According to The Chronicle of Higher Education, researchers found that a variety of factors led students and families to mismatch. For instance, financial background often played a role, causing students with financial constraints to enroll in low quality colleges that did not meet their academic abilities. Conversely, students from wealthier families were less likely to undermatch, but also more likely to overmatch, noted Inside Higher Ed. Having too much information about college also tended to cause students to overmatch, while beginning college more than a year after graduating high school increased the likelihood of undermatching, reported The Chronicle of Higher Education. Location was also a factor. Students who lived within 50 miles of a public institution that was a "good match" were less likely to undermatch.

The authors noted that mismatching could be detrimental for students. For example, Inside Higher Ed pointed out that high performing students at low quality colleges might not feel challenged and, therefore, exert less effort or pick up bad study habits from their peers. On the other hand, low performing students at high quality colleges may be overwhelmed by the academic pace and performance expectations.

The authors also pointed out, however, that mismatching is not always a bad thing and in fact, may be legitimate, as decisions are not solely based on academic factors. The Chronicle of Higher Education reported that, according to Dillon, students might select a college based on its athletic teams or programs, religious history or exceptional academic reputation in a specific area of interest.

Dillon stated that more attention needs to be given to the issue and plans to work on a study that will examine the effects of mismatching on students' graduation rates and future employment.