Study Finds An Increase In Mental Illness Among College Students 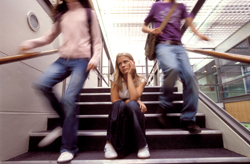 Data presented at the annual meeting of the American Psychological Association showed that the number of college students with a serious mental illness is rising, reported the Los Angeles Times.

John Guthman, lead author of the study, and his team analyzed 3,265 students who sought college counseling between September 1997 and August 2009. Students were examined for mental disorders, suicidal thoughts and self-injurious behavior.

Although the researchers did not pinpoint the cause of these changes, Guthman speculated that college life may not be the reason. Instead, he argued that there are now more outreach programs available to help students than there was in the past. "It could be that colleges are seen as more supportive environments," he said.

Guthman also suggested that medication may have improved over the years, making mental illness less of a barrier. "Students that may not have been able to go to campus a decade back are now able to function well enough to go and succeed," he said.

Counseling centers may also be providing better support and resources for students with mental illnesses. LiveScience suggested that university clinicians may have become better at evaluating mental issues or clinicians may be more willing to provide diagnoses so that students can receive the proper treatment.

The findings, however, were not all negative. "We all feel like things are getting worse, [but] the data says yes and no," said Guthman. According to researchers, severe anxiety and thoughts of suicide declined over the years. Guthman told LiveScience that the decrease in suicidal thoughts may be due to improvements in suicide prevention education.

Researchers pointed out that although the exact cause of the changes was not identified, it is still important to note what areas have changed in terms of mental health so that clinicians can provide the best assistance possible to students with mental illnesses. "We need to be sensitive to the data and plan our programs and interventions to address the changes and challenges in college student mental health," said Guthman.