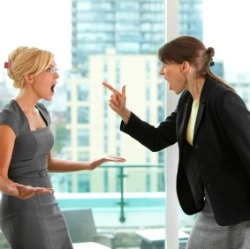 Despite efforts to address and prevent workplace bullying, it is still a problem in many offices. According to Radio Boston, Massachusetts is even considering a "Healthy Workplace" bill that, if passed, would grant employees protection and legal recourse against bosses that have caused physical and/or psychological abuse or harassment at work. A recent study, however, showed that bullying is still prevalent and that many workplace bullies are actually achieving high levels of career success.

The Wall Street Journal reported that researchers at the University of Buffalo School of Management analyzed behavioral and job performance data from 54 employees at a U.S. health care company and found that bullies received positive reviews from supervisors and used social and political skill -- defined as the ability to effectively use one's knowledge of others to make people act in ways that enhance personal or organizational objectives -- to successfully get ahead in the workplace.

"If people are politically skilled, they can do bad things really well," commented Darren C. Treadway, PhD associate professor of organization and human resources in the UB School of Management and lead researcher on the study, in The Wall Street Journal.

The study, which was published in the Journal of Managerial Psychology earlier this year, is the first to examine a bully's job performance, according to a University of Buffalo press release. It also hypothesizes why bullies thrive, despite increased awareness and efforts to stop such abuse and harassment.

As Dr. Treadway explained in the press release, "Many bullies can be seen as charming and friendly, but they are highly destructive and can manipulate others into providing them with the resources they need to get ahead."

Though the data is based on responses from health care workers, Dr. Treadway noted that the findings could easily translate to other industries and companies.

According to Medical Daily, bullies, whether they are successful in getting ahead or not, can inflict physical and mental distress on those around them. Examples of some of the most common symptoms include high blood pressure, sleep disruption, severe anxiety and migraines. Workplace bullying could negatively affect a company as well by causing high turnover and difficulties with recruiting and hiring as well as lowering productivity.

In the press release, Dr. Treadway suggested that companies assess workers' civility and camaraderie when evaluating performance as one way to manage office bullying.

"Employers can work to reduce the prevalence by finding organizationally appropriate ways for employees to achieve their goals, by incorporating measures of civility and camaraderie into performance evaluations, and by helping staff to develop the skills needed to manage bullies," said Dr. Treadway.