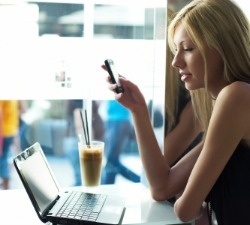 College women average nearly 12 hours a day texting, social networking, watching television and doing other media-based activities, a new study showed. It is no surprise that these activities may be affecting grades. In fact, the study, published online in April in the Emerging Adulthood journal, showed that the greater the media use by female college students, the more lack of sleep and uncompleted homework occurred, U.S. News & World Report noted.

"The implication of these results would seem to be that reducing college students' media use might improve their academic performance," Jennifer Walsh, a study researcher and assistant professor at the Miriam Hospital Centers for Behavioral and Preventive Medicine in Providence, R.I., told U.S. News & World Report. "However, given the central role media play in the lives of young people, this may not be a practical goal for educators and parents."

Researchers surveyed 483 freshmen for the study at a northeastern U.S. university, Science World Report reported. Participants were asked how much time they spent the prior week on these activities: watching television or movies, listening to music, surfing the Internet, social networking, texting, talking on the phone, reading magazines, newspapers or books other than for school, and playing video games. The women also rated their academic confidence and revealed any problems like insufficient sleep, alcohol or drug use, missing class or not finishing homework. Researchers collected the participants' grade point averages from January and June.

Investigators compared the college women's media use to their GPAs and behaviors, PsychCentral reported. They discovered greater media use, in general, correlated with lower grade point averages and increased academic-compromising behaviors. Results varied, however, by type of activity. Use of cell phones, social networking, watching movies/television and reading magazines were linked most negatively to subsequent academic performance. Reading newspapers and listening to music, however, were tied to positive academic outcomes.

According to U.S. News & World Report, Walsh clarified that despite the correlations, a hard conclusion cannot be drawn from her study's results that greater social media use leads to poor academic performance. She indicated more research would have to be done.

Jeffrey Hall, an associate professor in the department of communication studies at the University of Kansas, in Lawrence, refuted the 12-hours' usage finding. Previous research, he said, has shown that users are engaged in more than one activity about 30 percent of the time they spend on media. Had Walsh taken into account that figure, the average time college women spend on media use daily would have been more like nine hours, which Hall described in U.S. News & World Report as a "more reasonable estimate."

"It is absolutely not the case that college women spend nearly half their day using media," he said.