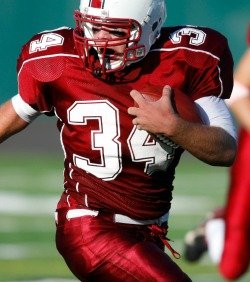 These days, student athletes are expected to give 100 percent both on and off the field - not only do they have to spend time training for and participating in their chosen sport, but they must also find time to focus on their academic studies. Yet, many student athletes struggle to be confident in their academics and may be affected by some of the negative athletic stereotypes that persist. Indeed, a recent study from Michigan State University shows that this may be true and that coaches with high academic expectations are those who may be able to successfully impact student outcomes, Red Orbit reports.

For the study, published in the Journal of College Student Development, researchers interviewed female and male athletes from various schools and sporting backgrounds. Over 300 student athletes coming from small and large schools and from a diverse range of sports that included basketball, football, cross-country, and rowing were queried. The overall results showed that when coaches had higher expectations of students, students' confidence in the classroom increased.

"Coaches spend a lot of time with their players, and they can play such an important role to build academic confidence in student-athletes -- not just good enough grades to be eligible for sports," said Deborah Feltz, a professor of kinesiology at MSU and author of the study, as per UPI.

The study also examined the self-fulfilling prophecy that may exist behind the 'dumb jock' stereotype, Red Orbit reported. Indeed, Feltz's research showed that when students thought of themselves in a stereotypical light, they were more likely to give up when it came to academic achievement. Additionally, students who saw themselves first and foremost as athletes were less likely to feel confident about their potential for academic success. This attitude was most apparent for students in high-visibility sports such as football and basketball. Interviewed students also indicated that they felt peers expected them to perform more poorly. She said students can even hear "prejudicial" remarks from professors, according to UPI.

However, results from the study revealed that there is hope for student athletes susceptible to the "dumb jock" stereotype. Research shows that coaches may play an important role in a student athlete's academic achievement. According to a Michigan State University press release, Feltz believes that athletic coaches may be in the best position to help student athletes succeed in spite of stereotypes, although professors and these athletes' peers also have a role in the process.

"It may be enough to just remind players they are college students, which is a big deal, you know? A lot of these students are the first in their family to go to college," she said.